Look Up in the Sky: The Amazing Story of Superman2006 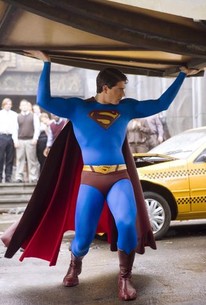 Look Up in the Sky: The Amazing Story of Superman Photos

From the comic book to the silver screen and beyond, few superheroes have left such a lasting impression on the fantasy-loving masses as mild-mannered "Daily Planet"-reporter-turned-high-flying-bulletproof-do-gooder Superman. In this documentary set to celebrate the release of X-Men director Bryan Singer's 2006 film Superman Returns, the exciting history of the Man of Steel is told through interviews and archival footage of past Superman films, television shows, and comics. A special sneak preview of newly released footage from Superman Returns ensured that fans received a comprehensive history of their favorite caped crusader that led right up to the release of the highly anticipated film.

Critic Reviews for Look Up in the Sky: The Amazing Story of Superman

A mixed bag, with a tremendously engaging first half and a clunky, repetitive, salesman-esque second half... but it's got enough of the goods where it counts.

Audience Reviews for Look Up in the Sky: The Amazing Story of Superman

I've never been a fan of Superman, but this enlightening documentary really allows you to respect what is, in my opinion, an out dated character. This film details the highs and lows of Superman in popular culture, and avoids being just an advertisement for his latest incarnation. There are interesting tidbits, such as many of the distinctive characters/traits coming from the early radio shows. We see Superman's effects on celebrities, writers, producers, a world at war, and much more. At times it places its feet where they're not wanted. Did we really need talk on September 11th? Probably more of a nice introduction to the character, or good for those looking to expand their knowledge. But most fans will be familiar with what's going on.

Good information in this documentary. I recommend it for the folks looking to learn more about the Man of Steel on film.

Interesting but it's not something you'll watch more than 2 or 3 times throughout your lifetime.

An very remarkable documentary that's extremely accurate and gets everything almost right.

Look Up in the Sky: The Amazing Story of Superman Quotes