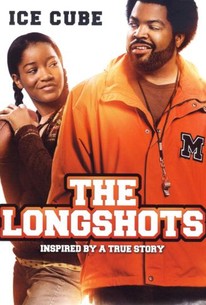 Critics Consensus: The Longshots means well, but it's a largely formulaic affair, rarely deviating from the inspirational sports movie playbook.

Critics Consensus: The Longshots means well, but it's a largely formulaic affair, rarely deviating from the inspirational sports movie playbook.

Critic Consensus: The Longshots means well, but it's a largely formulaic affair, rarely deviating from the inspirational sports movie playbook.

Former Limp Bizkit frontman Fred Durst directs Ice Cube and Keke Palmer in this battle-of-the-sexes sports comedy about a former high-school football star who coaches his niece to become the first-ever girl quarterback in the history of Pop Warner football. Based on a true story, The Longshots opens in the struggling American town of Minden, IL. The Minden Browns used to be one of the strongest teams in the Pop Warner league, but lately things have taken a turn for the worst. Recognizing that his old team needs some fresh blood in order to make a comeback, a former player (Cube) trains his 11-year-old niece, Jasmine (Palmer), to throw the ball like a true gridiron giant. While the powers that be scoff at the idea of a female quarterback, they soon begin to sing a different tune as Jasmine leads the Browns to the championships and an invigorating shot at redemption. ~ Jason Buchanan, Rovi

News & Interviews for The Longshots

View All The Longshots News

Critic Reviews for The Longshots

It is unabashedly sentimental and, at times sincerely touching, mainly when Ice Cube and Palmer are alone together on the screen.

The Longshots is a likable enough Cinderella story, one whose heart is clearly in the right place, even if it winds up on its sleeve once too often.

This genuinely affecting movie, based on a true story, has a heart as big as a football field even when its plot points are telegraphed.

The Longshots (awful title, guys) plays every instrument in the cliché orchestra, but it at least plays them well, and its characters are likable enough to settle in with for a pleasant hour and a half.

Despite its roots in real life, much of The Longshots feels like Hollywood stirring the pot.

The script may have taken an hour to write, and I hope they got a bulk rate on generic inspirational music, but Cube and his young co-star, Keke Palmer, are plenty charismatic, and Durst doesn't knock over the camera.

It has a nice message, and despite the fact that I feel he's been totally emasculated over the years, Cube remains a solid actor.

Durst's surprisingly gentle and understated direction lends the proceedings authenticity even when they cover the most pro forma ground.

That's the problem with this well-intentioned celebration of the spirit of Title IX: it wants so badly to be liked that it tries to blend into the crowd. [Blu-ray]

Ice Cube brings his family film "A" game to The Longshots

Audience Reviews for The Longshots

The Longshots is a predictable but enjoyable film about a young girl who just wants to blend in. She's a bit awkward and hides behind her books and is pretty much a loner. She would rather be left alone and seems pretty depressed about her father abandoning her. Her mother Claire works hard long hours and enlists her daughters fathers brother to look after Jasmine while she works. He refuses at first, but eventually agrees. He's not happy about the situation and she's not all that happy about the arrangement either. Curtis finds Jasmine to be rude, distant, and a bit weird since she ignores him behind her books. She doesn't care for him all that much either. She rags on him about his clothes and tells him a few times that he smells. Eventually they find a common interest, Football. Over the sport the two become very close and start to care a lot about each other. I am always more interested in the relationships between the characters. I enjoyed watching the relationship between the uncle and niece build up from being cold and distant to loving like a father and daughter relationship. Of course there was football in the middle of all that. Curtis helps Jasmine come out her shell by teaching her how to play football and by encouraging her to put herself out there. In turn she helped him peel off all the layers he had been hiding behind as well and become more than the smelly man who drinks beer out of a bag. It's a cute charming film. One the family could enjoy.

This story behind this movie was OK. I didn't think Keke Palmer played the role tough enough to play an 11 year old Pop Warner football player. Even for 11 year olds, it is a bruising game. But realism aside, it is an uplifting story.

Another remarkable true story on American football, but this film is a heart-warming and touching family-friendly, and similarly funny like Hardball. What an unbelievable and fabulous story of the first girl joined in football with boys as a new quarterback with assist from her uncle, an ex-forlorn high school footballer. Ice Cube does an excellent performance as an uncle (a great father-figure) of the first girl quarterback in Pop Warner football history.

You should really see this...for the " come back kid " story in all of us. See this...it is packed with loads of fun...especially if you are a football fan!