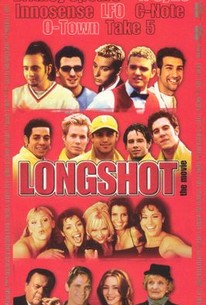 Erstwhile gigolo and personal fitness instructor Jack (Tony DeCamillis) is blackmailed by a powerful businessman, Pryce (Paul Sorvino), who wants Jack to woo beautiful, young, wealthy widow Rachel Montgomery (Hunter Tylo) to discover insider financial information that Pryce can use in the stock market to make tons of money. Jack has no choice because Pryce threatens the life of Jack's younger brother Alex (Joey Schulthorpe) if he doesn't play along. As part of his plot, Jack brings Alex to meet Rachel's 16-year-old daughter Gloria (Danielle Fishel). After singing a song to her in front of hundreds of spectators at a karaoke contest at the beach, Gloria and Alex become a couple, just as Jack reveals to Rachel, who is smitten with him, that it was all a set up. The bad guys get his info and four hearts are broken. Can this story have a happy ending? It's a longshot, but maybe.

Critic Reviews for Longshot (Jack of All Trades)

Given how absolutely wretched this movie is, I'm sure Britney Spears and other bit players hoped the film would never see the light of day.

There are no featured reviews for Longshot (Jack of All Trades) at this time.

Longshot (Jack of All Trades) Quotes