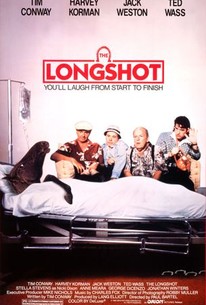 Comic veterans Harvey Korman, Anne Meara, Jack Weston and Tim Conway (who also wrote the script), co-star in this tale of four luckless gamblers who in desperation borrow a large sum for a local loanshark so they can bet on a particular horse. Unfortunately, they bet on the wrong nag and suddenly the foursome must scramble around for quick cash before the loanshark's thugs show up for some bruising payback. Mike Nichols executive produced.

Ollie the Fish
as Himself

Buckley Norris
as Man in Stands

Pat Kehoe
as Man at Jail

Critic Reviews for The Longshot

There are no critic reviews yet for The Longshot. Keep checking Rotten Tomatoes for updates!

Audience Reviews for The Longshot

There are no featured audience reviews yet. Click the link below to see what others say about The Longshot!