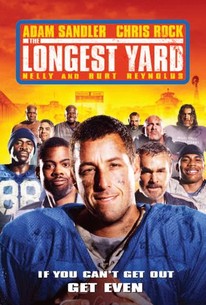 Critics Consensus: This Yard has some laughs but missing from this remake is the edginess of the original.

Critics Consensus: This Yard has some laughs but missing from this remake is the edginess of the original.

Critic Consensus: This Yard has some laughs but missing from this remake is the edginess of the original.

One of the toughest and best-remembered sports movies of the 1970s gets a humorous makeover in this comedy. Paul "Wrecking" Crewe (Adam Sandler) was once a famous professional football player, but after several years out of the limelight and an alcohol problem have taken their toll, Crewe is arrested for a serious traffic accident aggravated by the fact he was drunk. Crewe is sentenced to Allenville Penitentiary, where Warden Hazen (James Cromwell) is something of a football fan. Hazen had organized his guards into an impressive football team, and clears a healthy profit by taking bets on their games. Looking to make the competition more interesting, Hazen suggests that Crewe put together a team from the inmate population to play his guards. With the help of fellow prisoner Caretaker (Chris Rock), Crewe recruits the heaviest hitters from the cell block for the team, but the guys don't play like a unit until Crewe and Caretaker get some help from Nate Scarborough (Burt Reynolds), a former college and NFL coach doing hard time. Adapted from Robert Aldrich's 1974 box-office smash of the same name, The Longest Yard also features rap star Nelly and Nicholas Turturro; the film has previously been loosely remade in 2001 as Mean Machine, with the action moved to England and the game changed to soccer. ~ Mark Deming, Rovi

Chris Berman
as Himself

Dan Patrick
as Off. Jack Pugh

Sean Salisbury
as Vic
View All

News & Interviews for The Longest Yard

View All The Longest Yard News

Critic Reviews for The Longest Yard

Everyone involved with this remake claims the utmost respect for Robert Aldrich's raucously funny 1974 original. So you have to wonder why they crapped all over it, starting with the casting.

Adam Sandler, of course, is no Burt Reynolds. But then neither is Burt Reynolds these days, judging by his performance as the team's crusty mentor.

A Division III imitation of the original.

People will go see The Longest Yard for all sorts of reasons -- its lively humor, the current of violence that's just under the surface, its message of underdog racial reconciliation, or the fact that there's no actual football to watch on TV.

The pleasure is entirely like eating cake made from cake mix. It's not like you don't know how it's going to turn out, or how it tasted the last time you ate it.

This remake of the 1974 sports comedy-drama The Longest Yard is hardly a classic. But then again, neither was the original Burt Reynolds-starring version.

Unlike the original, this version lacks that gritty edge that made it so effective.

A film we could live without, inspired by an original that was anything but essential.

This edition of Yard has a lighter feel than the original -- well, considering it's a movie about prison inmates.

Audience Reviews for The Longest Yard

So as you can tell from the title this is a modern (for the time) remake of the Burt Reynolds vehicle of the same name. And when I say its a remake I mean its literally a scene for scene remake, but now a vehicle for Adam Sandler. The plot is identical to the original movie which sees Paul Crewe (Sandler) going to jail after assaulting his rich girlfriend and then going off on a joyride in her expensive car. Upon arrival in the big house Crewe is pressured/blackmailed into coaching the jail football team by the warden; but eventually ends up organising a training game between the convicts and guards. Crewe must battle his inner demons, pride and dignity versus cowing down to the warden for a safe but cowardly existence. Of course not much of that is translated across into this because its an Adam Sandler movie. Cue lots of immature toilet humour and sexual innuendos. The first thing that really doesn't work in this movie is the plot opener. We find Crewe with his rich girlfriend, living in her luxurious pad. Said girlfriend is an uncredited cameo by Courtney Cox who looks unbelievable gorgeous I kid you not. She basically explains to Crewe that she owns him, he is her toy, as long as he obeys...his life will be very comfortable. Who in their right mind would say no to this??!! And before you think about it, you all need to see Cox and the outfit she's in. No bloke would walk away from this scenario, I'd be on my knees begging to be leashed and collared! So straight away I'm thinking this character is an idiot for throwing this away (the hot girl and her assets). The next problem I had with this is Sandler and the fact he's just not believable as an ex-pro footballer. Admittedly Reynolds wasn't overly convincing to look at either but at least he looked relatively fit. But that's just a minor issue really, the real issue (as mentioned above) is the fact that this movie loses all the heart, soul and grit of the original. The 1974 movie was three things: an acceptable comedy, a hard and surprisingly dark prison drama, and a reasonably gritty sports flick. This new movie is a cheap slapstick riddled spoof, chock full of profanity and cameos mugging for the camera. The prison setting is merely an excuse for lots of cliched predictable prison related sight gags and nothing more. There is no real tension or drama, that aspect has been totally jettisoned. And despite the sports side of things being much glossier and slickly shot, it doesn't hold a candle to the original movie. Its actually incredible to see the difference between the two movies when it comes down to the football side of things. In the original movie the game was very down to earth, nothing fancy. A brutal game of football in a very basic looking arena with no frills, it was believable. In this remake the game looks like something from the flippin' NFL! The arena is huge with all the modern perks, the pitch is perfect, massive crowds, sexy cheerleaders, all very glamorous. Clearly this prison has some money apparently. I admit I don't know much about American football being British, I do know American universities and colleges do have amazing sports facilities that far outstrip anything similar in the UK. But would a US prison have such sports facilities? As for the cast, well naturally you have double the big name cameos of the original, both sports and entertainment wise. Sports wise there are quite a few big football names in here, never heard of them myself so I'll just leave it there. Entertainment wise there are some cool additions such as one time action man (and footballer) Brian Bosworth. David Patrick Kelly is perfect as the weaselly snitch Unger, but criminally underused. Quentin Tarantino collaborator Eddie Bunker just about manages his role (he looked pretty old). And Crewe's right-hand man 'Caretaker' is played by Chris Rock; who spends most of his screen time making jokes about white boys because apparently that's all he can do. Cloris Leachman, Steve Austin, Terry Crews, William Fichtner, Dalip Singh (dude his [b]HUGE[/b]), Rob Schneider makes his usual pointless Sandler movie cameo, and James Cromwell adds gravitas as warden Hazen. Lastly Reynolds plays Nate Scarborough in a cringeworthy performance that isn't helped by the fact his ancient character steps in to play as a replacement and manages to score a touchdown. Because of course he does. I can't single out any one cast member though seeing as they were all pretty terrible. Twas like watching amateur dramatics half the time. All in all this entire venture just seemed pointless. A chance for Sandler to mess around with his mates and call it work, and Reynolds needing work. What makes it so painful is the fact they've totally missed the point of the original movie by cutting the actual drama. Yeah there is some funny visual stuff sure, but you balance that with gritty tension of the prison setting. The only part they kinda got right was the death of Caretaker, but cutting back into infantile humour so quickly just destroys any emotional impact. Maybe if they hadn't aimed this at the moronic teenage MTV crowd (obligatory rap soundtrack...ugh!) it could of been half decent. But even then what's the point when the original captured it all so perfectly. And that's where I'm gonna end this, stick to the original.

Here is a so-called populist piece that begins with some pretty loose assumptions that bear some pretty loose scrutiny: 1) Most people believe that prisons are corrupt, but especially foul are the unnecessarily sadistic guards, 2) Most people believe that most convicts are basically cool, though misunderstood just plain folks, 3) Revenge against the sadistic guards is justified. Wooo-weee, but that's a lot of assumptions Past those curiosities of specious thought this film leans on many generic racist stereotypes and clichés (which are bad when the guards use them but good when the cons use them?) in an effort to elicit har-de-har-har laughter. It fails. Rob a 7-11 and get sent up sometime, so then to enjoy completely the grade school hilarity to which this dreck plays homage.

People who lined up to bash this film had better get used to seeing more like it. Hollywood these days is stuck in a rut where three types of films account for nearly every film they release. Those are: remakes, sequels, and films based on comic book characters. The Longest Yard would of course fit into the first category. It is a slightly updated, but fairly faithful remake of the 1974 film of the same name. This time, we have Adam Sandler who plays the incarcerated quarterback that Burt Reynolds played in the original. Reynolds is on hand to play a minor role which the original film also contained. The plot is still the same. Prisoners vs guards in a game of football. Pretty simple. Did the film make me laugh? Sure it did. There are more than a few chuckles, but not much in the way of side-splitting material. Sandler is actually not that memorable in this film. Some of the best performances actually come from people you might not expect. I was truly impressed with Nelly and Michael Irvin. Both men had their characters down, and really proved they could actually act. Chris Rock is about as good as you'd expect. Your own personal opinion of him will determine how you rate his performance. James Cromwell plays the corrupt warden about as well as you might expect. He's pretty much got the market cornered on evil white guy roles, since J.T. Walsh's untimely death. The rest of the cast becomes a game of "see if you can spot the NFL player, WWE combatant, or famous sports journalist". And what on earth was Cloris Leachman doing in the Bernadette Peters role from the original? Did she lose some kind of bet with Sandler on the set of Spanglish or something? The original sucked but was worth more then a 1/2 star.

Sandler's take on this famed remake goes for it on 4th down! Some may say that the comedic direction steered the film out of place, but it was the gritty point-of-view on the gridiron that caught my eye. Funny, dirty and obscene at times, but nonetheless good. 4.5/5