Long Strange Trip: The Untold Story of The Grateful Dead (2017) 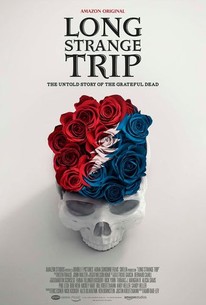 The 30-year odyssey of the Grateful Dead was the most unlikely success story in rock 'n' roll history. Famously averse to publicity and seemingly incapable of recording radio-friendly hits, they flouted music-industry convention by giving their live music away to a global network of tape traders and becoming the highest-grossing concert act in America through word of mouth alone. Directed by Amir Bar-Lev (The Tillman Story) and executive produced by Martin Scorsese (The Last Waltz), Long Strange Trip is the first full-length documentary to explore the fiercely independent vision, perpetual innovation, and uncompromising commitment to their audience that made the Bay Area band one of the most influential musical groups of their generation. Artfully assembling candid interviews with the band, road crew, family members and notable Deadheads, Bar-Lev reveals the untold history of the Dead and the freewheeling psychedelic subculture that sprouted up around it. The film also provides poignant insight into the psyche of late lead guitarist Jerry Garcia, whose disdain for authority clashed with his de facto leadership of the sprawling collective that kept the show on the road. With a soundtrack that captures some of the band's most dynamic live performances as well as unguarded offstage moments and never-before-seen interviews, footage and photos, Long Strange Trip explores the Dead's singular experiment in radically eclectic music making. Much more than the "behind the music" backstory of an exceptionally talented and beloved group of musicians, the film is at once an inspiring tale of unfettered artistic expression, a heartfelt American tragedy, and an incisive history of the rise and fall of 20th-century counterculture.

News & Interviews for Long Strange Trip: The Untold Story of The Grateful Dead

View All Long Strange Trip: The Untold Story of The Grateful Dead News

Critic Reviews for Long Strange Trip: The Untold Story of The Grateful Dead

It tells the story beautifully, organically, and, by the end, tenderly, as it moves through six thematic "acts."

I'm glad I persisted. It begins as a standard, if meticulous rock doc... But the film seeks the key to the band's magic -- what elevated them from a group of musicians who toured endlessly into a US phenomenon inspiring cult-like devotion.

Using never-before-seen footage and interviews, Bar-Lev's warts-and-all approach fits a band that backed into fame in spite of itself.

These multivalent tales of the Dead are awe-inspiring and thought-provoking without fail.

You don't need a VR headset to watch Amir Bar-Lev's documentary about the Grateful Dead, because this four-hour movie is as immersive a wade into the waters of the Bay Area-germinated psychedelic band's history as 2D gets.

A bountiful trove of archival images and rare footage sketches their communal life offstage and the counterculture in which they played so formative a part. Crew members, family and fans share memories and lore.

[Long Strange Trip] unravels a tale of sex, drugs, and rock & roll that doesn't come off as cliché, cloying, or hagiographic.

Love 'em or hate 'em, when someone goes this deep, you can't help but feel absorbed.

Compelling whether you care about the band or not, the film provides a historical understanding of the Dead and of the fan base rather than just a case for their enjoyment.

Although the film is never sentimental, it would be difficult to watch it without warming to its subject.

There are no featured reviews for Long Strange Trip: The Untold Story of The Grateful Dead at this time.