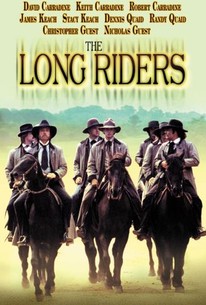 Critics Consensus: With its pared down storytelling, The Long Riders delivers with an evocative atmosphere and artful brutality.

Critic Consensus: With its pared down storytelling, The Long Riders delivers with an evocative atmosphere and artful brutality.

The hook in Walter Hill's mythic retelling of the James-Younger outlaw legend is in the casting; the James, Younger, Miller, and Ford Brothers are played by a string of acting brothers, the Keachs, the Carradines, the Quaids and the Guests. The film begins as outlaws are robbing a bank. After the robbery, Ed Miller (Dennis Quaid) finds himself kicked out of the gang for needlessly killing a man during the robbery. Jesse James (James Keach) hands over Ed's share of the money and tells him to leave, a feeling held mutually by Ed's brother Clell (Randy Quaid). After the killing the gang decides to split up for awhile. The James boys return to their wives and farms, while Cole Younger (David Carradine) travels to Texas with his prostitute girlfriend Belle Starr (Pamela Reed). After the brief respite, the gang reunites to rob a well-stocked bank in Northfield, Minnesota. The robbery turns out disastrously, with most of the gang either wounded or dying. The James boys are the only ones not seriously hurt, and they leave the rest of the gang behind, escaping while they can. After the James boys leave, the remnants of the gang are captured. But trailing the Jameses is a relentless posse. Frank and Jesse manage to keep one step ahead until the Ford brothers (Christopher Guest and Nicholas Guest) make a deal with the Pinkerton detectives trailing the outlaws. ~ Paul Brenner, Rovi

Luis Contreras
as Man at the Bar

R.B. Thrift
as Archie
View All

Critic Reviews for The Long Riders

Hill is very much in the American grain, the inheritor of the Ford-Hawks-Walsh tradition of artful, understated action film making.

What's ultimately missing is a definable point of view which would tie together the myriad events on display and fill in the blanks which Hill has imposed on the action by sapping it of emotional or historical meaning.

A beautiful, laconic and unsentimental film.

The cinematography is perfect, the folklore is wisely managed, and the music is excellent. [Full Review in Spanish]

The Long Riders isn't quite sure which way it wants to ride, but the action scenes and cinematography make up for any misdirection.

Hill's lean, mean approach never had a more appealing texture than it does here...

The casting problems aside, this is a fairly solid, but not particularly extraordinary film.

One of the more idiosyncratic James gang westerns but not necessarily one of the better ones.

Sacrificing investigations into the mentality behind America's most feared band of outlaws, Hill plumps for an evocation of time and place. He does a magnificent job.

It is an action film, an engaging one, and covers old ground with a contemporary style which never feels out of place.

Audience Reviews for The Long Riders

Very good western that has been forgotten about and notable for the casting of the Keach brothers, the Guest brothers, the Carradine brothers and the Quaid brothers in the main roles of the James-Younger gang. Starts off with a bank raid which goes slightly wrong setting the scene for a 'Young Guns' type western only with a sensible stance but unfortunately does then become a little dull throughout the middle. There is allot of dialog and family affairs between the gang members which is fine but you do loose a little interest, this does pick up as you head towards the last section of the film of course and very good it is too. You can see where the 'Young Guns' notion cam from I think from the final big gun battle sequence of the ill-fated attempt to rob the Northfield First National Bank in Minnesota, the whole sequence is lovely with slow motion gun fire, slow motion bullet hits, horses tearing down the main street and finally leaping through a large glass window riders n all. I would say this film was an inspiration for many modern 'rock n roll' type westerns. Despite that the film is completely serious and actually handled very well in terms of historical accuracy and artistic license. Yes allot is fictional but at the same time believeable and there are lots of accounts that have been incorporated into the film which are spot on, mainly the deaths of gang members and of course Jesse James. Not your typical Hill film but he sure made a good one here which deserves a place among the best in the genre, its dirty, realistic, uses great locations and has a good bold cult cast line up, watch out for James Remar as Cherokee Indian Sam Starr in maybe the only bad choice of the film.

Like Sam Fuller? Peckinpah? Walter Hill? The Carradine's? The Keach's? The Quaids? The Guests? Then you'll probably enjoy The Long Riders. It is however ANOTHER retelling of Jesse James and his gang story, but at least this is one of the better ones.

An amazing portrayal of The Wild West and the most famous gang and notorious outlaws ever to live - The James Younger Gang. Following Jesse James and his gang from it's high peak down until it's last robbery this movie introduces you to some emotional and trying times in the life of James and his counterparts. Historically I found it to be one of the most accurate tellings of The James Legend ever told. The idea that the Youngers, James, Millers, and Fords were all played by real life brothers really brought out the chemistry between the actors. You could truly tell they had a love for there brothers and when tension fell between the gang you could truly feel the atmopshere in your heart. This movie is an amazing film. What stops me from giving it five stars? The ending. The Assination of James scene was one of the worst I ever seen, I don't know how it went wrong towards the end but it went from The James Younger Gangs last robbery - skipped all the way to the assination, and then ended on that note. It forgot about personal relationship and truly you only see the Fords very momentarly. This film would of done itself great to stop directly after the fall of The James Younger Gang and let another movie like "The Assination of Jesse James by the coward robert ford" tell that story. Overall though the movie was a great flick and deserves to be owned by any western genre fan.