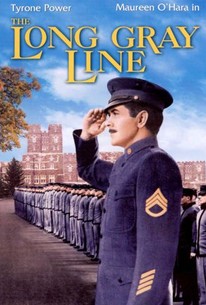 The life story of West Point athletic director Marty Maher was the inspiration for John Ford's The Long Gray Line. Told in flashback, the film recalls the first days at the Point for Irish immigrant Maher (Tyrone Power), a pugnacious boy who can't seem to fit in with the institution's regimen of unquestioning discipline. Athletic director Ward Bond takes a liking to Maher and arranges for the young man to become his assistant; Bond also plays Cupid between Maher and Irish maidservant Mary O'Donnell (Maureen O'Hara). When Mary's baby is stillborn, the Mahers begin to regard the West Point cadets as their surrogate children: this eventually leads to the film's most touching scene, in which Mary bids farewell to her son-substitute as he marches off to World War II. Following Mary's death, Marty stays on at the Point, until the place seems somehow incomplete without his presence. On the occasion of his forced retirement, Maher gently pleads with one of his former students--President Dwight D. Eisenhower--to permit him to remain at his post (Ike is played by Harry Carey Jr. in his early scenes, and by the voice of Paul Frees in the wraparound White House scenes). Based on Marty Maher's autobiography, The Long Gray Line seems at first glance too leisurely for its own good, but this appealing film gradually grows on its audience--just like Marty Maher himself.

Elbert Steele
as The President

Harry Denny
as Priest
View All

John Ford's 1955 bio-pic about the longtime officer Marty Maher is one of his grandest and heartiest films.

Clearly not for every taste, but a work that vibrates with tenderness and emotion.

The result is one of the most emotional films of its author. [Full Review in Spanish]

Earnest but somewhat schmaltzy drama of career West Point teacher, good cast even if the accents are laid on a little thick.