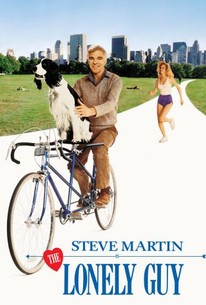 In a comedy as flat as the cardboard cut-outs of movie stars that appear in one scene, Steve Martin plays Larry Hubbard, a wild and lonely guy who has been dumped by his girlfriend. Since misery loves company, he takes up with Warren, a fellow Lonely Guy (Charles Grodin), and eventually both Warren and Larry find some surprising companions, especially after Larry writes a best-selling Lonely Guy Guide.

Merv Griffin
as Himself

Candi Brough
as Anita and Chelsea

Randi Brough
as Anita and Chelsea

Steven Hurwitz
as Man on Roof

Helen Verbit
as Woman in Window

Karyn Harrison
as Couple in Bar

Hunt Block
as Couple in Bar

Jerry Grayson
as Man Who Gets Shot

Ken Hixon
as Guest in Church

Gloria Irizarry
as Woman at Elevated

Dominic Barto
as Holdup Man No. 2

Charlie Laiken
as Man on Roof

Steve Hurwitz
as Man on Roof

Hardy Rawls
as Man on Roof

Doug Smith
as Man on Roof

Tom Kubiak
as Man on Roof

Joanne Dalsass
as Model at Party

Stephanie Segal
as Agent at Party

Robina Suwol
as Girl at Party

George Tyne
as Director at Party

Stephanie Segel
as Agent at Party

Leslie Bevis
as One of the Seven Deadly Sins

Lamya Derval
as One of the Seven Deadly Sins

Jenny Gago
as One of the Seven Deadly Sins

Marie Laurin
as One of the even Deadly Sins
View All

News & Interviews for The Lonely Guy

Total Recall: The Heartbreak Kid and the Movies of Neil Simon
Toronto Wrapup: Senh, Jen And Tim’s Raves And Rants From The Festival

View All The Lonely Guy News

Critic Reviews for The Lonely Guy

Martin's trademark wacky humor is fitfully in evidence, but seems much more repressed than usual in order to fit into the relatively realistic world of single working people.

The kind of movie that seems to have been made to play in empty theaters on overcast January afternoons.

It tries a little bit of everything, and winds up with an air of messy desperation.

Arthur Hiller's direction exudes a flavorless professionalism, a quality that doesn't count for much in this context.

A mindless comedy that's about as funny as a life sentence in solitary confinement.

An inventive comic meditation on being single.

Very funny, early Steve Martin comedy. Has some great bits including a gag with spary-on sweat and another with cardboard stand-ups doubling as friends for lonely guys. Not Martin's funniest film, but it's up there.

Gets funnier with age.

Audience Reviews for The Lonely Guy

The title of this movie pretty much says it all. This is a movie about a lonely guy who is searching for some love. He's tormented by his own loneliness and this movie follows him in his search for a woman to fall in love with. A classic Steve Martin movie, very good.

If you're sad and lonely, watch this great comedy, you'll still be lonely but at least you wont be sad about it anymore!

One of the weakest of Martin's 80s movies. Quite dated, but still worth a watch if you're a hardcore fan.

Mildly amusing sitcom in which Steve Martin discovers that being a pathetic loser has it's upside. The script was by Neil Simon, which explains it's "Woody Allen lite" feeling. Inoffensive, but rarely hilarious.