Lonely are the Brave1962 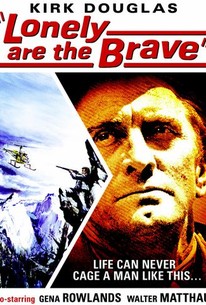 Lonely are the Brave Photos

David Miller helmed screenwriter Dalton Trumbo's mournful masterpiece, a hymn to rugged individualism and freedom slowly being strangled to death by voracious urban development. Kirk Douglas, a Korean War vet, is a footloose cowboy who lives most of his life under the stars, going from job to job, and not averse to cutting his way through barbed-wire fences when they get in his way. His uncompromising spirit is severely challenged when he breaks out of jail after a minor offense, and the entire county's police force tries to recapture him before he can leave the territory.

Bill Raisch
as `One Arm'

Bill Bixby
as Airman in helicopter
View All

Critic Reviews for Lonely are the Brave

Such a shocking beginning is the first of many attributes that place this film as the best - and most atypical - western in which Jerry Goldsmith was involved throughout his professional career. [Full Review in Spanish]

Afterwards, [Kirk Douglas] made no mystery of his love of the film, later declaring it his all-time favorite of his work. And why not?

Lonely are the Brave, a film fairly stuffed with symbolism, shows how inevitably the heroic, human, in its real sense unsophisticated world of the West and its values are crushed by the synthetic, the mechanical, the wasteful and vicious in modern life.

Kirk Douglas produced and starred in this elegiac Western, scripted by Dalton Trumbo, which laments the vanishing Old West, its heroes and their mores, replaced by a modern world dominated by progress and technology.

One of only a few Kirk Douglas films where the hammy actor didn't want to make me gag.

Kirk's favorite, and a true classic.

Audience Reviews for Lonely are the Brave

Observant drama of a maverick cowboy whose way of life has almost entirely disappeared. What he perceives as a good deed for a friend turns out to ultimately be a life and death struggle for him. Excellent work by a cast of familiar faces with Walter Matthau very good as a world weary sheriff and especially outstanding Kirk Douglas, in his own favorite of his performances. The ending is heart rending.

I'm beginning to wonder if Kirk Douglas ever gave a bad performance. If you only know him from Spartacus then you don't know what you're missing. His lesser known films, like Ace in the Hole, Champion, The Bad and the Beautiful, Paths of Glory, and Lonely are the Brave are a testament to his talent and his enormous contributions to the art of movie making.

Lonely are the Brave is an underrated classic that never seemed to get is due. A mostly great story (I did nod off a couple times but to the film's credit, it was past 4AM), some great acting (this movie--along with Ace in the Hole--is a monument to my underappreciation of Kirk Douglas), some fine direction and some d a m n fine cinematography make for a memorable moviegoing experience. This is a sort of upbeat movie for a movie about such a doomed character and Douglas plays John (Jack for short) Burns with an almost naive optimism in a way that's hopeful but almost jarring at the same time. The supporting performances (particularly Walter Matthau) were great, but despite Lonely are the Brave (original title of The Last Cowboy is much more appropriate) being made at the right time in history, it was made kind of too early in cinematic history for its own good. File between Easy Rider precursors and High Sierra with a dash of Hud.

ok i got sucked into this one. cowboy vs. modern world; not a huge fan of westerns or douglas but this was a heartbreaker. great script by dalton trumbo tho i'm not sure who came up with that title lol. with walter matthau, lovely young gena rowlands, oh, and george kennedy plays a mexican (!)

Lonely are the Brave Quotes