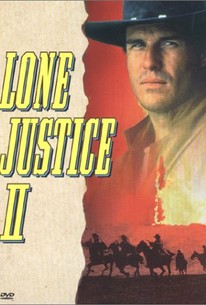 Directed by Jack Bender, Lone Justice 2 centers around the jailed Ned Blessing (Brad Johnson) as he reminisces about his hometown and the skirmishes he had gotten into with the rougher crowd. Ned gets a nasty shock upon his release--not only has the town he remembered so fondly been run down by bandits and racism towards the many black settlers, but his father is missing. Almost immediately, Ned finds himself in a fight with Verlon Borges (Bill McKinney), who, along with his sons, resides over the townspeople with an iron fist. Swearing to end the terror campaign, Ned teams up with a sweet prostitute (Brenda Bake) and hopes for the best. Lone Justice 2 originally aired on CBS.

Wes Studi
as One Horse
View All

There are no critic reviews yet for Lone Justice 2. Keep checking Rotten Tomatoes for updates!

There are no featured reviews for Lone Justice 2 at this time.