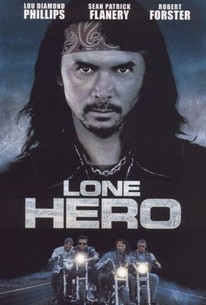 A let's-pretend villain becomes a real-life hero in this action drama. John (Sean Patrick Flanery) is a down-on-his-luck actor who is playing a black-hatted cowboy in an "Old West" show at an Arizona tourist trap. When a gang of violent bikers roars through the town, John is one of the few people willing to stand up to the invaders, and after the motorcycle gang decides to stick around for a while, John and a handful of his fellow cowboys find themselves joining forces with the police to protect the town after many of the locals turn tail and flee. Lone Hero also features Lou Diamond Phillips, Robert Forster, and Mark Metcalf.

The script (by director Ken Sanzel) is surprisingly intelligent, with several instances of clever dialogue and serious moments that don't feel awkward or out of place.

Flannery's got the action-kid thing down pat whilst Philips is evidently able to immerse himself in any role he sets his psyche too. Whilst Lone Hero is probably the lowest fare these guys have ever participated in , it's still eccentrically exciting

Lou Diamond Phillips (Bart) and his gang of renegade motorcycle buddies rob the local establishment, Sean Patrick Flanery (John) a local citizen, takes him into custody while Bart calls on the rest of his motorcycle gang to get him out of jail and terrorizes the town whilst doing so. It seems only Sean Patrick has the gumption to stand up to them along with Robert Forster who plays Gus, a cranky old tough guy who is good with a gun and his only ally.