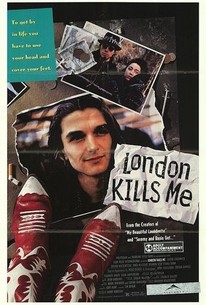 Acclaimed screenwriter Hanif Kureishi made his directorial debut with London Kills Me, a black comedy about the life of a group of squatters in Thatcher's England. Justin Chadwick stars as Clint, a former drug dealer attempting to go straight; he seeks a job as a busboy in an area restaurant, and is hired by the manager (Brad Dourif) on the condition that he find suitable footwear for the position. After taking up residence in a squatter's flat, he goes on a desperate search for shoes with his drug-dealer pal Muffdiver (Steven Mackintosh) and his girlfriend Sylvie (Emer McCourt) in tow.

Ben Peel
as DJ at Party

Charlie Creed-Miles
as Kid in Loft

Delroy Nunes
as Kid in Loft

James Caplan
as Boy in Country

Sarah Worth
as Girl in Country

Dave Atkins
as Heavy
View All

Critic Reviews for London Kills Me

Not as bad as it seems, nor as good as it aspires to be.

Proves that what was most special about the Frears-Kureishi collaborations was Kureishi.

Audience Reviews for London Kills Me

There are no featured audience reviews yet. Click the link below to see what others say about London Kills Me!