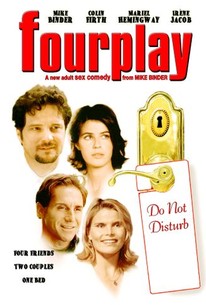 When the fire in an American sitcom writer's marriage grows dim, the grass looks much greener on the other side in this comedy from writer/director Mike Binder. Hired to work on a television sitcom in Great Britain, Ben Green (Binder) soon falls for alluring French makeup girl Fiona (Irène Jacob). Though Ben and Fiona's whirlwind romance soon leads to marriage, it doesn't take long for their sex life to sputter out and Ben's attentions to wander to Carly (Mariel Hemingway) -- the American actress who not only stars in the sitcom for which Ben writes, but is also married to producer Allen (Colin Firth). Though undeniably attracted to Ben, Carly's conscience prevents her from acting on her instincts for fear of hurting her husband. If only Ben and Carly were able to convince Fiona and Allen to have their own fling, they would finally be free to act on their true feelings for one another without fear of guilt or hurting their spouses.

Kate Magowan
as Claudia
View All

There are no critic reviews yet for Londinium. Keep checking Rotten Tomatoes for updates!

There are no featured audience reviews yet. Click the link below to see what others say about Londinium!