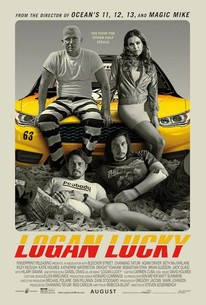 Trying to reverse a family curse, brothers Jimmy (Channing Tatum) and Clyde Logan (Adam Driver) set out to execute an elaborate robbery during the legendary Coca-Cola 600 race at the Charlotte Motor Speedway.

Soderbergh films the movie with swing, relishing the overlapping and intertwining strands of the complex plot, the brightly lit personalities of the characters it involves, and the magnificently conceived, essential tiny details ...

Soderbergh directs with his trademark pace and panache, but to this he adds an obvious affection for his hapless hillbilly heroes.

It's always supremely watchable, but rarely, if ever, commits itself to genuine jeopardy or suspense.

We admire the cheek and chic of how it's done. We wonder quite why it was thought worth doing.

The film's comedy is loose and generous, and its esprit de corps sneaks up on you with a soft tread.

Easily one of the funniest things you'll see this year, but it moves so far beyond simply trying to make us laugh that you may have to watch it a few times to understand how beautifully subversive Soderbergh is in fleshing out his characters.

Logan Lucky blends humor as well as excitement, sans the edginess you may expect in a Soderbergh picture.

The story itself doesn't matter, and in fact, has never really mattered. It's all about how the story is told. Here, we have a cheerful and frequently funny caper that feels like a tall tale told among friends having a few drinks.

It probably goes without saying that the photography and editing are beyond reproach, but I'm going to say it anyway. Logan Lucky is a ruthlessly designed and executed entertainment machine, but its obvious virtues may obscure its depth.

Along with the amusing characters and straightforward plot, Logan Lucky is pure entertainment.

From Steven Soderbergh comes Logan Lucky, an entertaining and comedic heist film. After losing his job Jimmy Logan plans to rob a local NASCAR speedway and puts together a team to help him. Starring Channing Tatum, Adam Driver, Daniel Craig, and Katie Holmes, the cast is pretty decent; however, the performances are rather lackluster. And the heist itself is pretty clichéd and hits a lot of the usual tropes. Still, the comedy works fairly well and there are some exciting scenes as the heist is pulled off and complications arise. Logan Lucky has its moments and is kind of fun at times, but it been done a hundred times before...and better.

Soderbergh leaves his alleged retirement to deliver us this entertaining (yet uneven) caper that may not be remarkable but benefits from a good ensemble cast, even if the movie suffers from problems of pacing and relies on a sense of humor that doesn't always work.

The joke here is that rednecks are considered a joke, but the film does not take that limited view even for the sake of a cheap laugh. So then, now let's have some fun. What if The Thomas Crown Affair and Duck Dynasty were brother and sister and then had kids? The trick of heist films is getting the viewers to side with the criminals, and thusly enjoy outsmarting the cops, the fuzz, the heat, 5-0, and this film supplies that high. On top of that there is the added joy of a cast that enjoys that just as much as the audience, so we get to watch them live it up. This film has that too. Throw in a little A-MUR-I-CA love, and you've got yourself a kick at the flickers.

Director Steven Soderbergh has been around for quite some time. Whether it's through the indie circuits or through mainstream media, he's made a name for himself for films like Magic Mike and Ocean's Eleven. Personally, I've loved most of his recent outings, getting a kick out of Magic Mike, becoming invested in Contagion, and even enjoying Side Effects and Haywire. Since then, he actually announced his retirement from cinema, but has recently returned for another kick at the can. Logan Lucky tops the majority of the aforementioned films, due to its consistently fun tone and alternative take on the heist premise. I thoroughly enjoyed this movie from start to finish and here is why I think you might as well. If for nothing else, Soderbergh knows how to flesh out characters on-screen, making you care about the circumstances. Whether a character is present for comedic relief or if they're meant to emotionally pull you along, I believe this movie accomplishes this for each and every character presented throughout. Logan Lucky follows a group of men (all having different reasons why) as they plan to heist the cashflow at the Charlotte Motor Speedway, during one of its biggest races ever. Not to be taken too seriously, this movie presents quite a bit of comedy and enough emotional depth between certain character's relationships, that I found myself invested throughout this entire picture. Looking back on Logan Lucky, I find myself complimenting many aspects, but the ones that stand out the most are the characters and the heist itself. Yes, the events leading up to the heist definitely have their moments, but the amount of banter and comedy between the characters throughout the heist works so well, that I feel like I'm rewatching that sequences play out in my head, long after I witnessed it in theatres. For all intensive purposes, this film is worth watching for the climax, and then some. On top of that, I honestly felt for each of the characters and I cared about their outcomes. Admittedly, some of the characters are present for comedy alone, but I felt quite attached to Adam Driver's Clyde and Channing Tatum's Jimmy, with Daniel Craig's Joe making for some of the biggest chuckles. When you're not supposed to take a film too seriously, it can come as a shock when the emotional moments kick into high gear throughout the third act. Luckily, the first act of this film sets those elements up, so it feels quite satisfying, adding a new layer than you weren't exactly expecting. That being said, this film does deviate from the plot a little after the climax, feeling like an added segment after the film had already concluded. Logan Lucky does suffer from the case of too many endings, but it manages to dig itself out of its hole by being very effective in tying up loose ends. Although the film starts to drag at the end, it's worth it for the final few moments, at least in my opinion. In the end, this isn't a film that will be winning any awards, but on a purely entertaining level, this is a fantastic piece of film that the end of this summer needed. Personally, I loved watching every minute of this movie. Yes, it deviates from the core premise a few times, but it's honestly just so that a payoff can be reached by the end. The cast works very well together, the heist itself is worth the price of admission alone, the comedy is very much present (even though it's not loaded with it), and there is a surprisingly emotional subplot added onto the end. Logan Lucky isn't perfect, but it's perfectly entertaining, so I loved it overall. Take that how you will, but I highly recommend it. Logan Lucky is a blast.