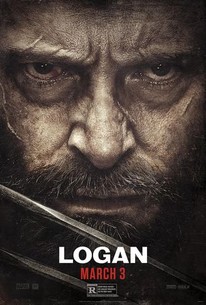 Critics Consensus: Hugh Jackman makes the most of his final outing as Wolverine with a gritty, nuanced performance in a violent but surprisingly thoughtful superhero action film that defies genre conventions.

Critics Consensus: Hugh Jackman makes the most of his final outing as Wolverine with a gritty, nuanced performance in a violent but surprisingly thoughtful superhero action film that defies genre conventions.

Critic Consensus: Hugh Jackman makes the most of his final outing as Wolverine with a gritty, nuanced performance in a violent but surprisingly thoughtful superhero action film that defies genre conventions.

It's 2029. Mutants are gone--or very nearly so. An isolated, despondent Logan is drinking his days away in a hideout on a remote stretch of the Mexican border, picking up petty cash as a driver for hire. His companions in exile are the outcast Caliban and an ailing Professor X, whose singular mind is plagued by worsening seizures. But Logan's attempts to hide from the world and his legacy abruptly end when a mysterious woman appears with an urgent request--that Logan shepherd an extraordinary young girl to safety. Soon, the claws come out as Logan must face off against dark forces and a villain from his own past on a live-or-die mission, one that will set the time-worn warrior on a path toward fulfilling his destiny.

Eriq La Salle
as Will Munson

77 Fearless Female Movie Heroes Who Inspire Us
R-Rated Superheroes Battle Royale: Who Is the Foulest A– Kicker of All?
Where to Watch Every 2018 Oscar Nominee

The ending of "Logan"... works in a bold and poignant way, providing the kind of closure that any story could be proud of.

Make no mistake, Logan earns its tears. If Jackman and Stewart are serious about this being their mutual X-Men swan song, they could not have crafted a more heartfelt valedictory.

Jackman and Stewart are why Logan works-why the film doesn't feel like a cheap exercise in bloody violence, and its subversion of typical superhero-movie tropes feels organic.

Another expensive throwaway aimed at milking money out of people who still read comic books. Color it stupid.

Strips away the spandex, the posse and the chaos, distilling the story down to the essence of the man, Logan. What's left is the agony and the ecstasy of mutanthood.

Jackman gives Logan a withering rage that seems heartfelt, not hammy; Stewart is touching in his enraged befuddlement; and Keen, who resembles here what Katie Holmes might look like if she were Carrie, has a feral intensity.

Jackman portrays Wolverine with a hint of drama that seems trustworthy, but along the way his latest journey becomes boring, repetitive, with ephemeral pleasurable moments ending in a cheeky climax trying to be sentimental. [Full review in Spanish]

This is probably the best superhero movie I've seen in years.

The thing that I liked the most about it was that it was a human story.

Logan works best if you have a history with the Wolverine character, but it's also remarkably impactful as a standalone film.

Logan is a solid ending for its title character and could easily be a high point for the X-Men series or a solid high to end on.

Logan is a powerful, excellent film - a fitting farewell to what turned out to be one (or two) of the most enduring character portrayals in film history.

Hugh Jackman delivers an intense and visceral performance in what is essentially a harrowing, gritty character study that does an amazing job ripping the viewer's soul apart little by little with a touching story about mortality and a devastating explosion of blood and violence.

The Wolverine movie I've wanted since I was eight years old.

"Logan" is THE prime example of the kind of glorious genre movie that can arise from a studio willing to fillet convention and financially-motivated tropes. "Deadpool" was only the beginning! James Mangold's brutal second foray in the standalone adventures of the X-Men's most popular mutant is a bold, savage vision with maturity and grit not seen in a superhero film before (or most modern blockbusters for that matter). "Logan's" influences don't go wholly unnoticed, but it remains very much it's own beast. Highlighted by arguably the best performance of Hugh Jackman's career, and fittingly in his signature role, "Logan" in not only the surefire best entry in the entire X-Men film franchise... it's something close to a masterpiece.