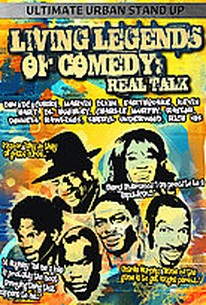 Star of Bad Boys of Comedy Rayzor hosts this documentary on the wild and gritty world of urban stand-up comedy. Through exclusive footage of the biggest names in the industry performing on stage, as well as through interviews with figures like D.L. Hughley, Earthquake, Sheryl Underwood, and Don "DC" Curry, the film explores how this medium has taken off in recent years, gaining fans all over the map.

There are no critic reviews yet for Living Legends of Comedy: Real Talk. Keep checking Rotten Tomatoes for updates!

There are no featured reviews for Living Legends of Comedy: Real Talk at this time.