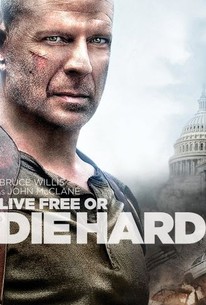 Critics Consensus: Live Free or Die Hard may be preposterous, but it's an efficient, action-packed summer popcorn flick with thrilling stunts and a commanding performance by Bruce Willis. Fans of the previous Die Hard films will not be disappointed.

Critics Consensus: Live Free or Die Hard may be preposterous, but it's an efficient, action-packed summer popcorn flick with thrilling stunts and a commanding performance by Bruce Willis. Fans of the previous Die Hard films will not be disappointed.

Critic Consensus: Live Free or Die Hard may be preposterous, but it's an efficient, action-packed summer popcorn flick with thrilling stunts and a commanding performance by Bruce Willis. Fans of the previous Die Hard films will not be disappointed.

On the Fourth of July weekend, an attack on the vulnerable United States infrastructure begins to shut down the entire nation. The mysterious figure behind the scheme has figured out every modern angle... but he never figured on McClane--the old-school "analog" fly in the "digital" ointment. It's the beginning of the holiday, but New York City Detective McClane isn't celebrating. He's had yet another argument with his college-age daughter Lucy, and received a crushingly routine assignment to bring in a young hacker, Matt Farrell, for questioning by the FBI. But for McClane, the ordinary has a habit of exploding into the extraordinary--abruptly hurtling him into the wrong place at the wrong time. With Farrell's help, McClane slowly begins to understand the increasing chaos surrounding him. An attack is underway on the vulnerable United States infrastructure, shutting down the entire nation. The mysterious figure behind the scheme, Thomas Gabriel, stays several moves ahead of McClane as he implements his incredible plans, known to uber-geeks like Farrell as a "fire sale" (as in, everything must go!)

Regina McKee Redwing
as Nearby Agent

But ultimately it's [Bruce] Willis who makes this loopy action movie so endearing...Nobody dies it better.

Len Wiseman handles many of the set-pieces with flair and tension.

It's not remotely plausible, but with Willis' McClane leaping onto the tailfins of passing jet fighters and bringing down helicopters by launching police cars at them, there's enough stuff blowing up that action fans won't mind much.

The bad guys' omnipotence at nearly every turn dilutes the film's suspense.

An enjoyable pop projection of post-9/11 anxiety. That said, it also makes you nostalgic for the days when irresponsible action movies didn't have to deal with it.

One of the surprises of the fourth instalment, apart from how good it is (who expected that?) is that the threat is internal.

It's an over-the-top spectacle of action violence, and I loved it.

Provided you don't put too much thought into it and just enjoy the ride, you'll have a blast.

Ultimately, a passable new Die Hard movie is more than anyone of us ever really expected, and that in itself is worth a jolly old Yippee-Ki-Ay.

Though it's mostly entertaining (if overlong), there is a sense that the whole thing has become somewhat rote.

Live Free or Die Hard needs a sense of joy, a sense that despite the harrowing nature of the situation, there is something entertaining - even to the participants - about the absurdity of the situation ... it doesn't have that.

A great, stand out action film that delivers all the good stuff from the other Die Hard films....and even a few ideas from some other top action films.
We get a cool relevant story for the present day about hackers getting in to control just about everything in the country, lots of great action scenes not overly reliant on CGI, great fights and some humour as well of course. John McClane is definitely one hard to kill guy, kicking bad guy ass just as well as ever. This is all out action you can't fail to like!!

Erases the 3rd and def a return to the good old days of action movies.