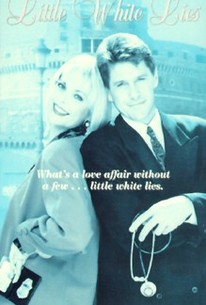 Little White Lies is a frenetic TV-movie hark bark to the "screwball comedies" of yore. Ann Jillian plays a just-getting-by Philadelphia policewoman who poses as a wealthy CEO because she's sick of "lady cop" jokes. Tim Matheson portrays a rich doctor who poses as a poverty-stricken orderly because he doesn't want women to pay attention to him because of his money. Mattheson falls for Jillian thinking that she's rich, while she falls for Matheson thinking that he's poor. And they went all the way to Rome to film this one. Little White Lies first aired November 27, 1989.

There are no critic reviews yet for Little White Lies. Keep checking Rotten Tomatoes for updates!

There are no featured reviews for Little White Lies at this time.