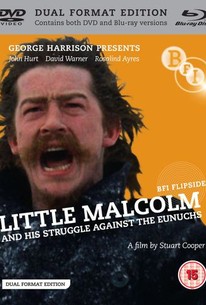 Little Malcolm is playwright David Halliwell's brilliantly vicious attack on the hollowness of the 1960s protest movement. Booted out of art school, misfit John Hurt uses his anger to organize a radical anti-establishment organization with two fellow malcontents. What seems at first attractive and trendy turns out to be a dangerous neo-fascist movement. David Warner costars as Hurt's erudite political foe, who finds it hard to stand up against the raw persuasive energy of demagoguery. Ex-Beatle George Harrison produced this searing sociopolitical tome. The film was originally released as Little Malcolm and His Struggle Against the Eunuch. ~ Hal Erickson, Rovi

There are no critic reviews yet for Little Malcolm (Little Malcolm and His Struggle Against the Eunuchs). Keep checking Rotten Tomatoes for updates!

There are no featured audience reviews yet. Click the link below to see what others say about Little Malcolm (Little Malcolm and His Struggle Against the Eunuchs)!