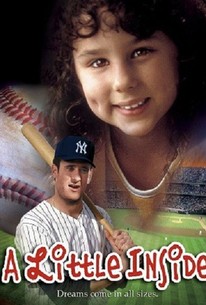 A Little Inside Photos

The directorial debut from filmmaker Kara Harshbarger, this family-friendly comedy drama stars young Hallie Eisenberg, best known for her appearances in several late-'90s Pepsi television ads. The film tells the story of an aspiring baseball pro who finds his life take a sharp and unexpected turn when he suddenly becomes the sole caregiver for his young daughter, Abby (Eisenberg). While the pair are at first unable to find common ground, they gradually learn from each other and begin building a life together.

Mason A. Lucero
as Classmate

Philippe Sabinus
as Mechanic
View All

Critic Reviews for A Little Inside

There are no critic reviews yet for A Little Inside. Keep checking Rotten Tomatoes for updates!

Audience Reviews for A Little Inside

There are no featured audience reviews yet. Click the link below to see what others say about A Little Inside!

A Little Inside Quotes