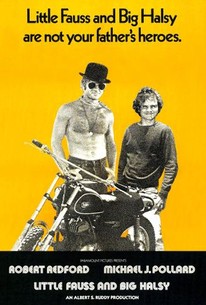 In this drama that features soundtrack songs by Johnny Cash, Carl Perkins, and Bob Dylan, Little Fauss, a mild-mannered, dim-bulb beginning motorcycle racer is befriended by Big Halsy, a loudmouth pro who has been banned from the track. Halsy offers Fauss a mechanic's job if only Fauss will allow him to assume his name and bike. The duo embark upon a series of adventures on the road usually culminating in Halsy taking advantage of Fauss. More abuse ensues when the two fall in love with Rita Nebraska. Eventually Fauss decides he has had enough, and the two duel it out on the track.

There are some men whose tragedy arises not from what they suffer but what they fail to feel. Little Fauss and Big Halsy are such men -- and so are those who made the movie.

In this context it is difficult to understand character or admire characterization.

Hampered by a thin screenplay, film is padded further by often-pretentious direction by Sidney J. Furie against expansive physical values.

Rotten to the core without a surface ripple in its moral superiority.

It's a fine, tough, funny movie, distinguished by Furie's extraordinary feel for empty spaces and the empty people that inhabit them, by strong acting, most of all by the success with which it makes an unfamiliar milieu familiar.

Little Fauss and Big Halsy is a mixed bag, with a helter skelter plot but nicely coordinated motorcycle action and some good background music by Johnny Cash, Carl Perkins, and Bob Dylan.

There are no featured audience reviews yet. Click the link below to see what others say about Little Fauss and Big Halsy!