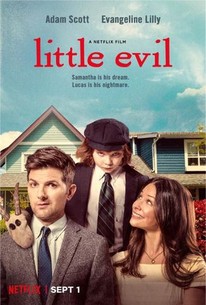 From writer/director Eli Craig (Tucker & Dale vs. Evil); Adam Scott (Big Little Lies, Parks & Rec) and Evangeline Lilly (Ant-Man, Lost) star in this offbeat comedy about love, family, and the Antichrist. Gary has just married the love of his life, Samantha, and is now the stepfather to her quirky 5 year old son, Lucas (Owen Atlas). But he soon finds himself in increasingly odd situations around the child, which drives him to believe his new stepson may actually be the spawn of Satan.

Little Evil is Omen by way of Shaun of the Dead. The tone, editing, and direction are all on par for what an audience enjoys in a horror-comedy.

Scott brings plenty of humor to the classic role of a seriously concerned stepdad. But it is once he actually starts pursuing the idea that Lucas actually might be the Antichrist that things get even funnier.

... the film channels the anxieties and fears of fatherhood - in this particular case, step-fatherhood - by asking what would happen if your new wife's kid was actually the antichrist.

Netflix's Little Evil is a surprisingly sweet, rather - dare I say it? - cute, horror comedy that injects heart into the "spawn of Satan" genre.

Little Evil has a little [Edgar] Wright-style cleverness: the movie's big chase sequence is between Gary and a demon, but the demon isn't some horrific monster - it's Lucas' beloved goat puppet, Reeroy.

Rarely (if ever) as hilarious as its premise...

[Little Evil] is fast-paced, funny, and more clever than you think it will be.

It's immensely enjoyable at times, restoring faith in Craig and his growing reputation for chipper chillers.

'Little Evil' combines comedy and horror in a clever offering with plenty of chuckles and scary sights for fans of both genres.

The unabashed affection on display for genre cinema is cute, and if you meet the movie on its own terms there is fun to be had.

Oddly enough, the greatest strength in this horror-comedy really isn't the horror or the comedy, it's the heart of the thing. It's ultimately a story about a step-parents acceptance into a new family, both him accepting of the child and the child accepting him. It just so happens that the child in this instance in the antichrist. That relationship as it develops is actually pretty heartwarming, not one you see a lot, and I'll be damned if they don't handle it in a wildly original way. I liked Adam Scott as the stepdad, and I liked his crew of stepdad support group. However, the rest of the movie just doesn't work as well as it should. As built up as the jokes are, none of them quite land. There's a lot of chuckles, but no big laughs. It also has some weird pacing issues, especially near the third act. I actually though the movie was prepping to end on a cliffhanger only to realize that it was actually just getting started for a surprise twist and there was actually about 20 minutes left. I still give it a marginally positive rating because it is still an overall surprisingly charming movie. It's surprisingly likable, and wildly original, and it's got a good heart. It just comes way short of it's ultimate potential

'Little Evil' is a seldom gut-bustingly funny horror-comedy which winks at Richard Donner's demon-seed masterpiece 'The Omen' (with the Tubular-Bells-esque, apocalyptic score heralding the Antichrist's dominion over Earth) but it bungles the burlesque execution. Eli Craig (of 'Tucker & Dale Vs. Evil') is a Kapellmeister at an idyllic surface over the arterial-spray terror. At one point, Craig flagrantly regurgitates the smash-cut structure of Edgar Wright. Lucas (Owen Atlas) is a doppelganger for Damien as well but Craig doesn't spoof diacritical scenes (other than the birthday soiree carnage with a self-immolating clown). As the office nuisance Al, Bridget Everett is truly excruciating. In a florid Hawaiian shirt and with an androgynous attitude about the step-parent role, Everett is assaultively unfunny to real estate agent Gary Bloom (Adam Scott) and the viewer's ear canals with the surfer tautology of "man". Ultimately though, 'Little Evil' is uprooted by a one-joke conceit in which all of Lucas' goat-puppet ventriloquism and other diablerie are faintly ratiocinated by a deadpan Scott. However, it is undeniably uproarious when Scott postulates that hair gel is why Lucas is frozen during his wedding day tornado. Sadly, much of the raillery about Satanism is monomaniacal to the mean-spirited, misogynistic extent where Gary's ravishing wife, Samantha (Evangeline Lilly), is a blathering ignoramus (a conversation about Lucas' conception at a cult ceremony with "warm red pain").

When it comes to being self-aware and making a mockery of a specific genre in film, movies can become a little full of themselves at times. Little Evil is the latest film to attempt exactly this, and I think it works wonderfully. With a surprisingly fresh take on a family being torn apart by the child, this film takes that notion pretty seriously, which makes it so hilarious to watch. This definitely isn't a movie for everyone, and I can actually see it being pretty divisive between likes and dislikes when it comes to audiences reflecting on their experience of it, but I personally found this movie to be a pleasure to watch. Now streaming on Netflix, here is why I believe this Horror/Comedy to be a win. Quite literally, this movie is about a man wo had wed a woman with a son who he believes to be the Antichrist. Now, there isn't a way to explain this premise without it sounding incredibly ridiculous, so it's a good thing this film focuses much more on the fact that it knows exactly what it is, rather than trying to scare its audience. If you don't find yourself chuckling within the first few minutes, you might as well stop watching, because it's definitely not going to be for you.I found myself laughing very hard throughout the majority of this movie, sort of reminding me of the experience I had with a film like We Came Together, which did the same mockery for the Rom-Com genre a few years ago. The way this film is presented is very unique and if for nothing else, I admired the creativity put into the script. Throughout the majority of this movie, it will have you asking the question of whether or not you should be laughing or taking it seriously, due to the fact that it still tries to remain a horror flick. By the third act, some of the comedy aspects are thrown away to compensate the story itself, but I found that okay, due to the fact that I was so incredibly entertained by the first two acts. Still, it can be jarring and will definitely confuse some of its audience. For these complaints and more, I can't see the majority of audiences enjoying this. This movie was clearly made for film fans and those who understand mockery of genres. When it comes down to Adam Scott, he has been pretty hit-or-miss for me throughout the years. I quite enjoyed him in the film Krampus, so I was excited to see him returning to something similar in tone, because this is where I feel he shines best. Aside from him being well-casted here, I found Evangeline Lilly, Bridget Everett, and young Owen Atlas to all be giving solid performances, most notably Briget Everett. Her character easily had the most laughs throughout the movie and as the film unveiled more of her backstory, I just fell more in love with her character (which is a man). The characters may not be fleshed out enough here, but they serve the story well enough to forgive that aspect. In the end, I honestly can't say that many people will have the same reaction to this film as I did. In fact, most people will probably disagree with me, due to the fact that I was sucked in and completely understood what they were going for here. It's not a perfect movie and the tone does shift too much, but those aspects never hurt the film for me. I was pleasantly surprised throughout its full 90 minutes and I think some people will definitely get a kick out of it as I did. It's one of the funniest experiences with a movie I've had all year, so I have to give it some personal props for that alone. This is a clever and unique concept that turns the horror genre on its head, and although this may be a bad recommendation for some, I just have to recommend people to give it a chance. Little Evil is a crazy little horror/comedy that's worth a watch.