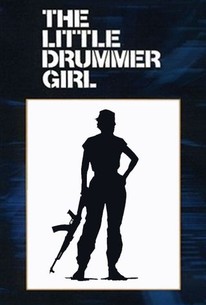 Based on John Le Carré's novel by the same name, this story about Charlie (Diane Keaton) a female double agent working between the Palestinians and Israelis, loses some of the excitement and in-depth characterization engendered by the long novel -- mainly because the novel is hard to capture in a two-hour filmed format. But the action itself carries viewers along as Charlie ends up leaving England and her job as an actress in a Brit repertory company to meet Kurtz (Klaus Kinski) in Greece who recruits her as a spy. Charlie later has to handle her own emotions when she gets romantically involved with her Israeli contact (Yorgo Voyagis), though events move her quickly along to a Palestinian military camp near Beirut. Once she has passed herself off as a reliable Palestinian agent and completed her military training at the camp, she goes to Germany to hunt down a Palestinian terrorist (Sami Frey). Filled with a multitude of characters and locations, not to mention camera shots, the intensity of this story is dissipated somewhat by literally and figuratively covering a lot of territory, though the thread of the story itself is never lost.

Mohammed Kassas
as Boy 1
View All

Like an enchanted escape artist, director George Roy Hill has pulled off that rarest of Hollywood feats -- the thriller of ideas.

It is so jammed with characters and incidents and mystifications that everything seems to get equal, cursory attention. And not a single one of the characters comes alive.

Stark criticisms are unavoidable, even as I'm forced to admit that the film is one of those wrongly-assembled movies that is built on such an unusual Hollywood premise...that it eventually becomes halfway fascinating.

Intriguing and complex but not entirely satisfying, George Roy Hill's version of Le Carre's novel suffers from the weak performance (perhaps even miscasting) of Diane Keaton in the lead role.

Excellent performances and a believable story. I don't understand why some reviewers took issue with it. I was engrossed by all of it, found it easy to follow, and felt it did justice to the human cost on both sides of the Israel / Palestine conflict. Worth seeing.

What I liked most in this solid, underrated thriller was the whole complexity of its situations, alliances and strategies as seen through the eyes of a naive actress caught in the middle of a conflict and following her heart instead of any political convictions.