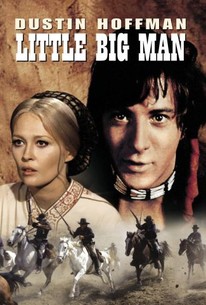 Adapted from the novel by Thomas Berger, Little Big Man opens with the spoken reminiscences of 121-year-old Jack Crabbe (Dustin Hoffman, immersed in tons of age makeup). In flashbacks, we see how, as a young and wide-eyed frontiersman, Crabbe is adopted by an Indian tribe led by philosophy-spouting Chief Dan George. The film's highlight is the Little Big Horn massacre, with megalomaniac General Custer (Richard Mulligan) self-destructing as Crabbe looks on. Faye Dunaway shows up along the way as a sensual preacher's wife, who later becomes the jaded object of Wild Bill Hickok's (Jeff Corey) affection. The ingenuous Crabbe at hand during virtually every highpoint of Western history. To prepare for the scenes in which Crabbe is one hundred-plus, Hoffman screamed for hours in order to give his voice the proper parched timbre. Little Big Man seldom falters during its 150 minutes, but time has taken some of the lustre off this once highly-praised frontier fable.

Ruben Moreno
as Shadow That Comes in Sight

Steve Shemayne
as Burns Red In The Sun

Steve Miranda
as Younger Bear as a Child

Bud Cokes
as Man at Bar

Might it be a serious attempt to right some unretrievable wrong via gallows humor which avoids the polemics? This seems to be the course taken; the attempt at least can be respected in theory.

An endlessly entertaining attempt to spin an epic in the form of a yarn.

Arthur Penn offers a new take of the culture clash between the White men and Native Americans in this revisionist. satirical, tone-shifting Western starring Dustin Hoffman and Faye Dunaway.

Penn seems to have little feel for the Western genre, but despite that the amazing thing is that this mock epic Western came out as well as it did.

During that early part of the film Little Big Man is a raucously funny work as bit by irreverent bit it deflates the western legend as expounded in hundreds of western movies.

This outraged reconfiguration of an all-American genre may be set in the Wild West, but it's also very much a bulletin of its time.

Easily one of the most entertaining (and presently overlooked) Westerns of the early 1970s.

A picaresque masterpiece about an inimitable American anti-hero whose wild adventures are delivered into our hearts and minds with the robust vitalities of comedy.

One of the great films of the early 70s.

An American classic, Little Big Man seeks to rectify Western history with this engrossing account of the colorful life of 121-year-old Jack Crabb.

Historical revisionism at some of it's finest (and most stinging). Based on a satirical novel, this is a bleakly dark dramedy/western about a 110 year-old man named Jack Crabb who tells his life story to a misguided 20th Century historian. Crabb is a white man who was raised by Native Americans from a young age. He grows accustomed to their humane, enlightened way of life, but eventually strikes out on his own to see the world. He gets involved in many notable historical events (a concept later revisited in Forrest Gump), mostly involving Custer, the white conquest of the west, and the dark side of American imperialism. It's not always a pretty sight, but it definitely rings true. This is a great movie, and definitely one of those times where I'm surprised (but happy), that it was a mainstream affair. It definitely fits into the scholarly movement going on at the time where revisionism was going strong, shedding light into events from previously ignored perspectives, and presenting a more balanced view of history. The cinematography is excellent, the direction is strong, the ambitions and goals noble, and the performances excellent. Hoffman delivers a wonderful turn here, and it's easily one of his best, even though it is sadly overlooked a lot of the time. The dark, quirky humor balances out with the material nicely, and this is a really eye opening film. Please give this one a look. It's not only a gem of the 70s, but a really important masterpiece of cinema in general.

The last survivor of the battle of Little Big Horn reminisces about his life in this off beat comic western starring Dustin Hoffman. The film obviously belongs to Hoffman himself as the entire story revolves around him and his life and he's an engagingly bemused anti-hero as he witnesses the atrocities and hypocrisies of the changing face of the old west, but what gives it real character is the supporting cast of oddballs who flit in and out of his sphere. These include yet another hilarious and charming performance from Chief Dan George as his adopted grandfather, a smouldering Faye Dunaway as the western equivalent of Mrs. Robinson and Richard Mulligan who plays Custer as a self-obsessed, pompous boob. It's very much a film of its time, sharing much of the flavour of anti-establishment fiction of the era and employs sly wit and gentle humour rather than the sentimentality and melodrama of the likes of Dances With Wolves in its depiction of the appalling mistreatment of the Native American population. One of the strangest westerns you'll ever see certainly, as well as one of the most interesting and fun.

one of the more unusual westerns ever made and one of my favorite films as a kid. starring dustin hoffman as a supposedly 121 yr old man, the only white survivor of the battle of the little big horn. ranging from black comedy to drama to slapstick and back, it's a highly entertaining picaresque and also one of the first films to address native american rights in any way. a bit dated now and i think dustin is probably miscast (his accent is particularly bad) but i still love it. and chief dan george is awesome! <3

Dustin Hoffman turns out a great but overlooked performance as a 121 year-old man who tells his life story. Little Big Man is a good movie but has a tone that changes way too much for its own good. It hits everything from black comedy to slapstick to heartbreaking. Just like with the movie Little Big Man is a precursor to, Dances With Wolves, I felt completely ashamed to be white. The Bill Hicock scenes were too few but at the same time great. Chief Dan George was amazing and had some of the best lines ("does she show pleasant enthusiasm when you mount her?"), the gay Indian/Native American (whatever your pleasure) was great and Faye Dunaway was very entertaining for the few brief moments she was in this movie.