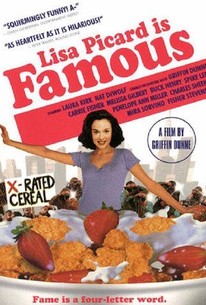 Mockumentary about would-be New York actress Lisa Picard who hopes to get more than a fleeting taste of fame when a racy cereal commercial brings her unexpected national notoriety. Earnest documentarian Andrew, who senses this actress's dreams are about to be fully realized, tracks her every move, attempting to capture the essence of someone in the seconds preceding their 15 minutes of fame. How do they walk, dress and act? Complicating matters even further is the fact that our objective documentarian is not so secretly hoping that this documentary about fame will help propel him to fame as well.

Sandra Bullock
as Herself

Carrie Fisher
as Herself

Melissa Gilbert
as Herself

Buck Henry
as Himself

Spike Lee
as Himself

Penelope Ann Miller
as Herself

Charlie Sheen
as Himself

Fisher Stevens
as Himself

Mira Sorvino
as Herself

Neil Butterfield
as Punk No. 1

Robert Rodriguez
as Punk No. 2

Neither as outright funny nor as resonant as it seems to want to be.

A solid mockumentary of both comedy and compassion.

While Lisa Picard may not have the freshest theme around, it is funny and well acted and very knowing about the ins and outs of show business.

Likable but not exceptional.

Funny and pathetically accurate portrait of an obsessed wanna-be

It'll probably be pretty popular on video, especially with anyone who's ever had the acting bug.

... it feels padded and stretched beyond its limits.

The film is a lot like its heroine: cocksure and half-cocked all at once.

While the script makes many astute observations and the performers are game, "Lisa Picard Is Famous" comes across as slight as the marginal characters it portrays.

A marshmallow-soft satire that eventually peters out into sticky near-melodrama.

There are no featured reviews for Lisa Picard Is Famous at this time.