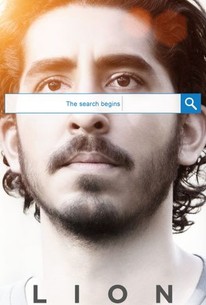 Critics Consensus: Lion's undeniably uplifting story and talented cast make it a moving journey that transcends the typical cliches of its genre.

Critics Consensus: Lion's undeniably uplifting story and talented cast make it a moving journey that transcends the typical cliches of its genre.

Critic Consensus: Lion's undeniably uplifting story and talented cast make it a moving journey that transcends the typical cliches of its genre.

Five-year-old Saroo gets lost on a train which takes him thousands of Kilometers across India, away from home and family. Saroo must learn to survive alone in Kolkata, before ultimately being adopted by an Australian couple. Twenty-five years later, armed with only a handful of memories, his unwavering determination, and a revolutionary technology known as Google Earth, he sets out to find his lost family and finally return to his first home.

The beginning is harrowing and the end is heartbreaking.

A deeply empathetic performance from Dev Patel and an unflinching view of child poverty on the streets of Calcutta provide a winning edge to Lion.

Google Earth has blind spots and so does Lion. Still, it covers an awful lot of ground and the views are stunning.

Robustly made, but very little to gnaw on.

This big-hearted film does full justice to the horror, the pathos and the drama of his postmodern odyssey.

Director Garth Davis and screenwriter Luke Davies throw all the soap suds at the story.

There are some structural problems with Lion, but the undeniably emotive pulse of the narrative is hard to deny in its final moments.

Lion is certainly a well-made film, but it was tough to get over the feeling of being poked and prodded by the filmmakers, looking for that one spot on your heart that will flood your eyes.

Natural and real. Those are the words to describe Lion.

Overall, while it boasts credible performances, Lion suffers from a poor infrastructure that unfortunately lessens its emotional power.

Lion is at once a heartbreaker, a journey for the soul and the senses, and ultimately the life-affirming experience you need it to be.

It is far from being a perfect movie. However, it is a completely delightful watch that will stay with you past the last frames. Even the most cynical won't be able to resist the charm of Lion.

An incredible true story told very well by Garth Davis and performed wonderfully by Dev Patel and the true star: Sunny Pawar. I work with children, and how you get a 6 year old to act as amazingly as he did is beyond me. It is an interesting and important story than informs and entertains.

There was a time when a picture like Lion would have easily won Best Picture. Beautifully shot and lovingly told, this is a grand epic that spans continents and decades. Changing tastes have maligned these kinds of dramas with derisive adjectives like sentimental, melodramatic or, heaven forbid, old fashioned. The production is none of those things. What it represents, is one man's exquisitely composed reminiscence of his life on this earth, a journey that takes him from India to Australia. The narrative builds to a conclusion that had me weeping at the end in an uncontrollable catharsis. It highlights a lot of concepts with sensitivity: the importance of family, the considerations of adoption, one's own identity, the wonders of the internet and love. It's an experience I won't soon forget. fastfilmreviews.com

Despite the extraordinary story that it tells and a great beginning, Lion is an uneven drama that makes up for its flaws with a beautiful ending. Full review on filmotrope. com

True stories can manipulate you into thinking that the actual story that happened is much more emotional that it actually way or vice versa. When a film chooses to show real footage throughout the end credits, it shows that the filmmakers took their time in casting the right talent ad showcasing the most important moment in their film to compare them. Of all the true stories that have come out this year or have yet to come out, I may just be remembering Lion above them all. Much more powerful than I was expecting it to be and taking very risky moves that most American films would never do, this film is easily near the top of my list for 2016. Here is why Lion is an incredibly powerful story that more people need to see. Boarding a train in his hometown after being left alone by his brother Guddu, young Saroo becomes lost on the streets of Calcutta. Battling his way through the streets in search for his family, he quickly realizes he is too far from home. Becoming adopted by an American family, he travels to live with them for over 25 years. Once he becomes a full grown adult, having a wonderful life with a girlfriend and a family that loves him, he makes it his mission to locate where he used to live as a child. Filled with incredibly moving performances from every cast member, Lion is a fantastic look into this true story that is more than satisfying in its final moments than I excepted. Dev Patel has gone back and forth between generic and quality films. From his performance in the Oscar-winning Slumdog Millionaire, to his brutal presence in The Last Airbender, I can see why certain people may hesitate on seeing his films. Personally, I have enjoyed him in just about everything and this may just be his finest work yet. It should come as no surprise when you see that he is acting with talent lie Nicole Kidman or Rooney Mara, but he really is something to marvel at here. Not only Dev Patel, but Sunny Pawar who portrays the younger version of Saroo is also an incredibly talent young actor. The telling of this story was perfect from beginning to end, without getting to cheesy and the performances sell it tenfold. Having said that, there was one aspect that surprised me more than anything and that was having an American film with more than half of its run time with subtitles. For a film that does take place in foreign countries half of the time, it should come as no surprise that it would have subtitles, but I didn't expect the entire first half of the film to present that. Lion runs about a solid hour in both Hindi and Bengali before switching over to English when Saroo is adopted. This was a risk that I loved and serviced the film in so many positive ways. It only made the film better in my opinion, the fact that they were not trying to make it more generic. The only reason I bring this up, is to warn certain viewers who may not be expecting so many subtitles. That is only a warning for the film, not a flaw. I thought about Lion quite a bit after the screening I attended and I must say, I wouldn't have changed a single moment of this picture. From start to finish, my eyes were full of tears as I gawked at the imagery, beautiful storytelling, fantastic camerawork, and jaw-dropping performance, along with a conclusion that truly took my breath away. To conclude, I can't express my love for this film enough. I don't think Lion is manipulative in any way, nor is it cheesy. It spends just the right amount of time in certain parts of the world and is paced wonderfully. Some people may not quite get enough out of the romantic aspect between Dev Patel and Rooney Mara, but I completely bought into that aspect of this story. Lion is definitely a film that needed to be made and I am disappointed that it is not being talked about as much as other awards contenders. This truly is a superb film. Emotion, score, direction, performances, and a screenplay that is not too far overdone are all aspects that make for a terrific film based on a true story. Every single one of those aspects are present here and I found myself in tears throughout the entire duration. Lion is one of the best films of the year!