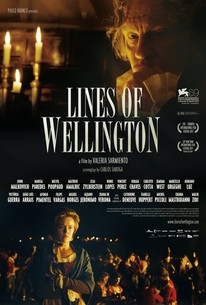 On September 27, 1810, the French troops commanded by Marshal Massena, were defeated in the Serra do Buçaco by the Anglo-Portuguese army of general Wellington. Despite the victory, Portuguese and British are forced to retreat from the enemy, numerically superior, in order to attract them to Torres Vedras, where Wellington had built fortified lines hardly surmountable. (c) Official Site

Critic Reviews for Lines of Wellington

A film to admire, with moments here and there to fully embrace

It's an odd experience, a Ruiz film (if it deserves to be called that) devoid of dreamy mystery, reduced to a mere handsome historical epic, albeit capably mounted by Portuguese producer extraordinaire Paulo Branco.

There are no featured reviews for Lines of Wellington at this time.