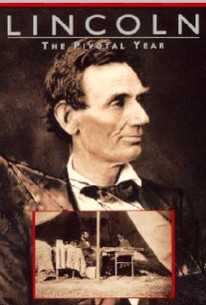 President Abraham Lincoln leads the Union in the fight to end the awful bloodshed of the Civil War. The year is 1863. The president had a continuous struggle with the commanders of his army, and the bloodshed from the fighting at Antietam and Fredericksburg distressed him greatly. 1863 was the year of his Emancipation Proclamation and Gettysburg Address. Listen to the story of the events that led to the amazing address at Gettysburg. Actor Jason Robards brings to life the voice of President Lincoln. PBS originally aired this program, the second of a four-volume set narrated by actor James Earl Jones.

Dabney Coleman
as Stephen A. Douglas

There are no critic reviews yet for Lincoln: The Pivotal Year, 1863. Keep checking Rotten Tomatoes for updates!

There are no featured reviews for Lincoln: The Pivotal Year, 1863 at this time.