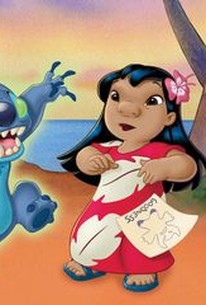 The animated feature-length film Lilo & Stitch 2: Stitch Has a Glitch follows the characters from the Oscar-nominated movie Lilo & Stitch. Everything seems to be going smoothly as the film begins, with Stitch acceptably assimilated into his adopted family and everyone planning for a gigantic hula festival. However, Stitch soon starts behaving as erratically as he did in the first film. Lilo (Dakota Fanning) and her older sister Nani (Tia Carrere) soon discover that there are some programming bugs in their alien friend that may make it impossible for him to stay with the new family that loves him.

News & Interviews for Lilo & Stitch 2: Stitch Has a Glitch

View All Lilo & Stitch 2: Stitch Has a Glitch News

Critic Reviews for Lilo & Stitch 2: Stitch Has a Glitch

Not much happens, and it happens to characters who don't feel quite right, and there's no reason to care about any of this except those reasons that you bring in with you.

More of the same, sweet and fun for kids.

The story is somewhat crumbly, but the real charm of "Lilo & Stitch" are the characters and their interactions.

[E]very aspect of the film here feels cheap and slapped together...

The first dud in the would-be trilogy

After a rough start, Lilo and Stitch 2 finally finds its story to become an emotional and entertaining film... climax will require parents to have frank discussions with kids

The idea behind the film would have been perfect for an eight-minute short subject, but stretched to over an hour, it seems like an eternity.

Lilo & Stitch 2 will, I suppose, play the same effective babysitter role as Disney's other DTV titles. But who cares?

As a parent, I'm not sure I can get behind a story that tells us that love can conquer anything -- even bringing the dead back to life

Audience Reviews for Lilo & Stitch 2: Stitch Has a Glitch

Having a lot to live up to, "Lilo and Stitch 2: Stitch has a Glitch" is among the many Disney sequels to get a direct to DVD and Video release, which I'm sure would make people think it will end up being a lesser film than it's predecessor, and that is true, but there is much more emotion toward the end of this film that makes up for it's very short running time. The credits start rolling 62 minutes in, and it felt like the perfect length for the little story they were trying to convey. Sure, there is not much developed in this film, and it is definitely meant solely for kids, but I sure enjoyed it. It may be a step down from the first on all levels, but it does not forget the kind of film it is. For what it's worth, it's a decent sequel.

It was okay, not close to the first.

It was okay, nothing like the first. I dont recommend this.

a sequel that i thought was fantastic, and im going to sound like a real wuss for saying this, but the ending is one of the few moments where i cried in a movie let alone an animated film