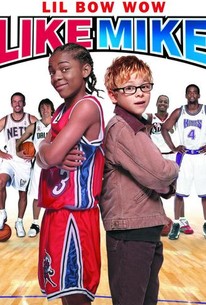 Critics Consensus: A pleasant and innocuous diversion for kids, but adults may have trouble sitting through the movie's predictable plotlines and schmaltz.

Critics Consensus: A pleasant and innocuous diversion for kids, but adults may have trouble sitting through the movie's predictable plotlines and schmaltz.

Critic Consensus: A pleasant and innocuous diversion for kids, but adults may have trouble sitting through the movie's predictable plotlines and schmaltz.

Pint-size rap music star Lil Bow Wow shows that he can play ball as well as he raps in this youth-oriented comedy about a young boy whose dream comes true in an unexpected way. Calvin Cambridge (Lil Bow Wow) is a 14-year-old boy, who, since the death of his parents, has been living in an orphanage run by the unpleasantly eccentric Stan Bittleman (Crispin Glover). While the tough but caring Sister Theresa (Anne Meara) tries to encourage the kids, Calvin knows that he and most of the other kids his age are poor prospects for adoption. Calvin loves basketball and idolizes Michael Jordan, but he's too short to be much of a challenge to the older kids when shooting hoop at the playground. One day, Calvin discovers a pair of old basketball sneakers with the initials "MJ" written on the inside. Calvin is convinced they once belonged to Michael Jordan, but he can hardly believe what happens when he puts them on -- suddenly he's able to make superhuman jump shots and dunks just like a miniature version of Air Jordan himself. Calvin's newly developed talent on the court comes to the attention of Frank Bernard (Eugene Levy), the manager of the Los Angeles Knights, an NBA team having a humiliating season. Bernard brings Calvin to the team as a novelty item, but with the help of Coach Wagner (Robert Forster) and the new kid's can-do attitude, the Knights start to climb out of the cellar and look like possible season champs. However, Tracey Reynolds (Morris Chestnut), who used to be the team's star player, isn't happy to have his thunder stolen by a 14-year-old boy -- especially when he's made Calvin's roommate and de-facto guardian on the road. Like Mike also features cameo appearances by a number of pro basketball stars, including Allen Iverson, Chris Webber, and Jason Kidd. ~ Mark Deming, Rovi

Vanessa A. Williams
as Pharmacist

Allen Iverson
as Himself

Chris Webber
as Himself

Jason Kidd
as Himself

Kevin Garnett
as Himself

Pat Croce
as Himself

Michael Finley
as Himself

Lethon Flowers III
as Himself

Steve Francis
as Himself

Tracy McGrady
as Himself

Alonzo Mourning
as Himself

Steve Nash
as Himself

Dirk Nowitzki
as Himself

Gary Payton
as Himself

Jason Richardson
as Himself

David Robinson
as Himself

Takeo Spikes
as Himself

John Robert Thompson
as Himself

Rasheed Wallace
as Himself

Gerald Wallis
as Himself

Rick Ducommun
as Dad Outside Arena

Arielle Peterson
as Kid With Dad No. 1

April Peterson
as Kid With Dad No. 2

Sybil Azur
as Cheerleader No. 1

Kimi Bateman
as Cheerleader No. 2

Diana Carreno
as Cheerleader No. 3

Faune A. Chambers
as Cheerleader No. 4

Karen Elmore
as Cheerleader No. 5

Staci Flood
as Cheerleader No. 6

Stacey Harper
as Cheerleader No. 7

Sandra McCoy
as Cheerleader No. 8

Sarah Smith
as Cheerleader No. 10

Addie Yungmee
as Cheerleader No. 11

Hayley Zelniker
as Cheerleader No. 12

Jimmy Kimmel
as Client in Commercial

Lance Barber
as Director in Commercial

Jon Edwin Wright
as Coach No. 1

Dwayne Foster
as Coach No. 2

Tyrone Merriweather
as Coach No. 3

Sloan Fischer
as Young Orphan No. 1

Bobby Hall
as Trainer No. 1

Curtis McCoy
as Trainer No. 2

James R. Platt
as Referee No. 1

[A] summer-weight but winsome basketball fantasy.

Director John Schultz's movie is as lame and predictable as you'd imagine, and it's chock full of orphanage cliches.

Bow Wow makes an impressive film debut; parents and children will love Calv's plucky can-do attitude; and the action sequences are given a little more oomph due to the presence of real life basketball pros.

A fantasy fable that should keep everyone in the family entertained.

This irritatingly feeble basketball movie for kids is co-produced by the NBA, for whom it is pretty candidly designed as a giant feature-length commercial.

As predictable as a Lakers championship.

It's formulaic stuff but done with enough gusto to entertain.

There's no excuse to come within a hundred feet of a screen playing this monstrosity of a movie.

There's no joke about the wretchedness that is Like Mike--except the cruel one on anyone who gets suckered into watching this crap.

...Full of stereotypical characters, plot holes, and unconvincing dialogue delivered by a host of so-so actors...

Though it doesn't exactly offer any great shakes in terms of plot or character development, the film's entertaining enough to be watched by kids and adults alike.

Full review sometime between now and 2050.

You know, when a company decides to make a movie about a kid playing professional basketball, they're basically saying "We're desperate!" This movie is ridiculous, it's unoriginal, it's badly acted. Basically, it's one of the worst sports movie of all time, and this is coming from a person who loved "The Fan" and "Mr. 3000". The worst part about the movie might be the script. It sounds like it was written by 2002, rap obsessed 5th graders. It was laughable AT BEST. Also, the acting wasn't very good. Even Jonathan Lipnicki and Eugene Levy from "American Pie" weren't very good. But I have to say that the lowlight must go to Lil Bow wow. It's clear the kid strongly believes he's "gangster". NOTE: I have yet to see "Fast and Furious: Tokyo Drift", so he might have gotten better. The whole story is extremely predictable. Kid goes to orphanage, kid learns how to play basketball, kid get's adopted by basketball player: THE END! Never before have I seen such appaling lack of creativity. I will admit there is one thing this movie is really good at: Stealing pbits and pieces from great sports movies to make their own. Basically, this is "Angels in the Outfield" meets "Rookie of the Year" meets "The Sandlot". Sandlot and Angels are good on their own, but NOT good mixed together. Face it directors. You guys lack the creativity to get even a B in ART CLASS!