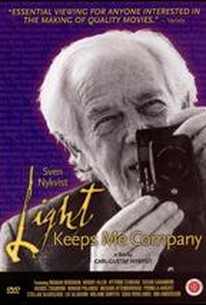 This moving, finely-wrought portrayal of legendary cinematographer Sven Nykvist was directed by his son Carl-Gustav Nykvist -- a noted filmmaker himself. Spanning from long forgotten kiddie flick in 1945 to Woody Allen's Celebrity (1997), Nykvist's career came to an abrupt end when he was diagnosed with a rare disorder that affected his speech. Though the film explores Nykvist's upbringing and turbulent private life (an ugly divorce, the suicide of one of his sons, an affair with Mia Farrow), the emotional heart of the film is his celebrated collaboration with auteur Ingmar Bergman, with whom Nykvist made some of his most enduring work, including Winter Light (1962) and Scenes from a Marriage (1973). As Bergman recalls his own career, he notes, "I don't miss making films, but I miss the collaboration with Sven." ~ Jonathan Crow, Rovi

Essential viewing for film buffs -- and anyone interested in the making of quality movies.

A reserved, quiet, but friendly man as this documentary, made by his son, demonstrates, Nykvist has gradually become as important as Bergman to Swedish film.

You simply celebrate the man's life, rather than exploring it or analyzing it.