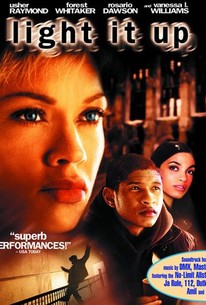 Critics Consensus: Soon into the student uprising, the story starts to feel like a warmed over after-school special.

Critics Consensus: Soon into the student uprising, the story starts to feel like a warmed over after-school special.

Critic Consensus: Soon into the student uprising, the story starts to feel like a warmed over after-school special.

Light It Up Photos

Noted R&B artist and producer Kenneth (Babyface) Edmonds served as executive producer for this tough urban drama. After a shooting incident in a neglected inner-city school leaves a police officer wounded, a group of students holds the cop hostage, in a desperate effort to force improvements to their school. The cast includes another R&B hitmaker, Usher, as well as Forest Whitaker, Vanessa L. Williams, and Rosario Dawson. ~ Mark Deming, Rovi

Forest Whitaker
as Off. Dante Jackson

Erica Hubbard
as Girl One in Bathroom

Serena Altschul
as Herself

Critic Reviews for Light It Up

The dialogue is ridiculous and condescending.

Writer-director Craig Bolotin wants to get our motors racing, our minds pondering and our hearts pumping. Laudable goals; shaky results.

Bolotin repeatedly reminds the viewer of his lack of imagination.

Nelson, Whitaker and their talented, young co-stars give this film most of whatever juice it has.

... it's this sense of the "real" that not only keeps Light It Up lively but that marks it -- for all its visual flair -- as happily out of step with a zeitgeist enamored of naught but money and notoriety as the wildly overhyped millennium turns.

...isn't so much a bad movie as an unfinished movie

"The Breakfast Club" in the Ghetto

It begins as a high school comedy romp and then abruptly turns into a TV cop show-caliber thriller.

Audience Reviews for Light It Up

Usher's "acting" ruined the whole thing for me

Light It Up Quotes