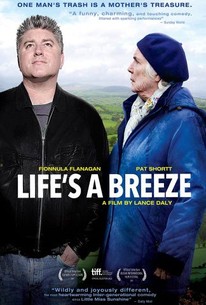 Fionnula Flanagan, Pat Shortt, Eva Birthistle, Kelly Thornton Synopsis: LIFE'S A BREEZE follows a family struggling to stay afloat and stay together through hard times in Ireland. Unemployed slacker Colm (Pat Shortt), his aging mother Nan (Fionnula Flanagan) and his niece Emma (Kelly Thornton) must overcome their many differences to lead their family in a race against time to find a lost fortune. (c) Magnolia

Paul Ronan
as Supervisor
View All

News & Interviews for Life's a Breeze

Critics Consensus: The Maze Runner Is Better-Than-Average YA Fare

View All Life's a Breeze News

Critic Reviews for Life's a Breeze

Life's a Breeze spins a sitcom plot into passable yet predictable entertainment.

As amiable and windswept as its title promises, for better or worse.

A small sweet film, the sort of unexpected pleasure movie fans often find at a small film festival or on some second-tier cable channel.

"Life's a Breeze" is a small film with a considerable amount of charm. Comic and idiosyncratic, it takes a warmhearted view toward its protagonists while still seeing them for exactly who they are.

"Life's a Breeze" is ultimately about as cutting and memorable as its title.

The film's surface naturalism and visual grit simply cover up a screenplay that's as full of crap as the average recent Hollywood comedy.

While the film may play on the slight side, it's engaging and enjoyable.

Yes, if it wasn't for the salty language, this might just be a TV movie. But, I liked it.

Despite the occasional emotional overtones, this is really a very light and enjoyable comedy.

The mundane story is not much, but the likable characters are fun.

Flanagan and appealing newcomer Kelly Thornton, as Nan's teenage granddaughter, deliver the only tolerable performances, probably because they don't say much, and like us, just observe the silliness on display.

Set amidst long unemployment lines, Daly freshly finds the heart within the slapstick and social criticism when he focuses on the oldest and younger generations.

Audience Reviews for Life's a Breeze

This movie definitely has some charming and sweet moments in there, but I honestly feel that its attempts at comedy felt incredibly forced. The best stuff in the movie is Emma's relationship with her grandmother and how they grow closer together thanks to the family's mishap of throwing out stuff that didn't belong to them in the first place. The problem with the comedy itself is simply the fact that it consists of someone saying something funny and the rest of the cast laughing, almost like a laugh track for a sitcom. As in this is the audience's cue to laugh. It honestly feels incredibly forced and inorganic. The plot itself is fairly simple, the family throws out Nan's mattress, which contains all her live savings, which she estimates are around 900,000 euros. A wild goose chase ensues and things keep getting complicated due to some of Colm's harebrained ideas and his ineptitude. It isn't funny and there isn't really much character development outside of Emma, Nan, and maybe Colm. Sort of begs the question why would you include all of these characters if it only centers on Emma and Nan. Plus, with the exception of Nan and Emma, all of the other members of the family come across as incredibly unlikable as they talk about what they're gonna do once they get their mother's money back, as if it belongs to them. Ultimately, they do learn their lesson, but it's hard to really like any of them to be completely honest. The acting is perfectly fine, Fionnula Flanagan has always been great, so nothing to complain about there. And Kelly Thornton, who plays Emma, was ok at best. There were instances where her delivery just felt incredibly forced and unnatural, but other times she looked much better. Not saying there isn't potential there, but she needs a lot of work before she could ever be considered a good actress. The rest of the cast is fine, but they didn't really do much. The writing also doesn't really do much, it's just not particularly interesting or effective at developing a compelling story. It has some sweet moments near the climax, and those are definitely earned, but ultimately the film is more hollow than it would like to pretend to be. This isn't a bad movie by any means, it's just one that is the very definition of average. If you want a comedy, however, this will be the wrong choice. There's much better comedies on Netflix than this. You won't miss much if you decide to skip this, trust me.

Light hearted Irish comedy directed and written by Lance Daly will make you laugh but sometimes it scratches the surface and makes you think deeper. Decent performances by the cast didn't require too much effort, and Kelly Thornton, Fionnula Flanagan, Pat Shortt and Eva Birthistle obviously had fun doing it. Straight forward story about a family which just lost a fortune and is searching around the streets (or rather tips) of Dublin. The importance of the money in today's family relationship is shown as it is - plain and simple. The tensions, the tragic and the funny elements are included in the chase of the money forgetting the people who become just accessories instead of the main subjects of life! If you like to find out what can happen when unemployed slacker Colm (Pat Shortt), his aging mother Nan (Fionnula Flanagan) and his niece Emma (Kelly Thornton) decide to find a lost fortune in a race against time, try this one.