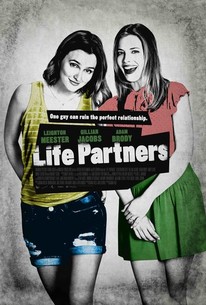 At 29, the most long-term relationship Sasha (Leighton Meester) and Paige (Gillian Jacobs) have ever been in is with each other, using their co-dependent friendship as an excuse not to venture out into the dating world alone. But when Paige meets nerdy Tim (Adam Brody) and starts to get serious for the first time, the nature of their friendship begins to shift. Fearing she's being cast aside, Sasha tries to keep their relationship the same, but does growing up also mean growing apart? (C) Magnolia

New on DVD & Blu-Ray: Foxcatcher, Outlander, and More
Critics Consensus: The Pyramid Is Cursed By A Silly Plot

Why does it feel nearly revelatory to see a film that treats female friendship with respect?

The two stars display a winning chemistry in this amusingly observant study of female friendship.

Meester and Jacobs have an easy, authentic chemistry, but there isn't enough structure or storytelling thrust to sustain interest in the plot: Triumphs, calamities and reunions keep happening, but none contains real dramatic heft.

Fogel refuses to pander by pretending that the girls can fix everything with a hug. Sacrifices must be made.

The charming story about millennial confusion is deftly written by Susanna Fogel (who also directs) and Joni Lefkowitz, and the dialog actually sounds like the way a pair of smart and funny twentysomethings might really talk.

On paper Life Partners has what it takes to be a gem of a character-based indie, but as executed, I'm sorry to report, this movie borders on insufferable.

Lefkowitz's tender, sharply observed script gets fleshed out by a handful of genuinely engaging performances.

It may not be boundary pushing, or revelatory cinema, but Life Partners is easy digestible, inoffensive and just a charming film. The performances are good, the script is solid, and the message is true: best friends are forever.

Life Partners exudes with twisty complications that are both enlightening and gently heartbreaking. Messner and Jacobs are fabulously endearing as the joined-by-the-hip besties coping with love and life lessons while dealing with the high expectations.

The focus is ultimately on Sasha and Paige's friendship, and how Paige's successes cause Sasha to reflect on her own failures, though being queer is not among them; it's just who she is.

Despite a few moments of sitcom silliness, [Leighton] Meester and [Gillian] Jacobs bring that struggle to relatable life.

While it's not the most perceptive film exploring the diversity of the lesbian experience, Life Partners has several insightful comic moments that ring true.

Great movie. Loved the relationship between the two best friends and how things change as they move along with their lives. Really relatable and well done. Very pleasantly surprised.

Gillian Jacobs and Leighton Meester have a true and relatable chemistry here. Every character is different, with their own set of defining (exaggerated but still realistic) traits. Certainly a teen movie for those of us who were teens when the "teen movie" thing kicked off back in the late 90's, in that, these "teens" are jaded 29 year olds who have no idea where the Hell their lives are going and are surrounded by the drama of the technological age, trying to ignore it and hope that it will all go away, while simultaneously acting like they know how to handle it better than anyone else. There are truths to be found in Life Partners, but is there a grade-a story, career-defining roles or off the rails staying power? No. So please do support this sweet little Indie, it's well worth it, but don't think you'll be getting the best the genre has to offer either.