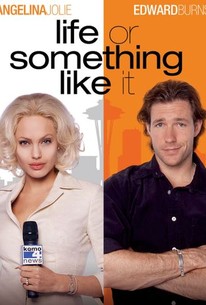 Critics Consensus: Though Jolie is appealing, Life or Something Like It is too contrived and predictable to convincingly convey its message of stopping to smell the roses.

Critics Consensus: Though Jolie is appealing, Life or Something Like It is too contrived and predictable to convincingly convey its message of stopping to smell the roses.

Critic Consensus: Though Jolie is appealing, Life or Something Like It is too contrived and predictable to convincingly convey its message of stopping to smell the roses.

An egotistical TV reporter learns to appreciate the good things in life thanks to an eccentric, homeless clairvoyant in this old-fashioned romantic comedy from director Stephen Herek (Mr. Holland's Opus). Seattle native Lanie Kerrigan (Angelina Jolie) has spent most of her adult existence trying to live down her gawky, geeky adolescence: She toils for hours at the gym to keep cellulite at bay; she's managed to snag an engagement to a star baseball player (Christian Kane); and through her chipper puff pieces on the nightly news, she's cultivated a loyal following of couch potatoes who pester her for autographs. She's ready to take the next step to national news when her boss suggests she further hone her skills with ace cameraman Pete Scanlon (Edward Burns), who also happens to be an old flame of Lanie's. Her comfortable but shallow existence begins to change the moment she and Pete do a story on Prophet Jack (Tony Shaloub), a sage soothsayer who spouts unusually accurate predictions to passers-by in exchange for spare change. Jack offers up the theory that Lanie will not get her cushy promotion; in fact, he says she'll die within a week. When Jack's other prophecies start coming true, Lanie starts living each day as if it were her last -- much to the dismay of her co-workers and her fiancé. ~ Michael Hastings, Rovi

Tawnya Pettiford-Wates
as Striker No. 2

P.J. Prinsloo
as Another Club Kid

Tony Doupe
as Man No. 1 in Sports Bar

Jamie Moss
as Man No. 2 in Sports Bar

Victoria Deschanel
as Woman at Cafe

Riley Cantner
as Kid with Cold

Ken Whelan
as Police Officer No. 2

Gary Lindsay
as Reporter No. 1

Natasha Smith
as Reporter No. 2

John Sharify
as Reporter No. 3

Tracy Vedder
as Reporter No. 4

Mike James
as Reporter No. 5
View All

Life, though funny and sometimes charming, doesn't give Lanie a believable context in which to stop and smell the roses.

Formulaic, delusional and about as accurate a depiction of life in television news (or something like it) as a Pillsbury bake-off.

Lanie, who suggests a blow-dried human Q-tip, is so jarring on the eyes, it's difficult to concentrate on the story.

Watching the bleach blonde actress prance around the steep hills of Seattle in skintight pastel skirt suits wobbling atop sky-high stilettos is almost more than one should have to bare.

...Clearly displays the workmanlike instincts of its creative team, instincts which neither inspire greatness nor fail altogether.

What begins as a somewhat predictable Hollywood romantic comedy, spirals into a tender, sweet love story and opens the door to life's deeper and more meaningful issues.

Not that bad of a film and you really can't predict the ending at all.

Angelina is told she's going to die by a tramp and so sets about learning what's "important" in life by shagging a flat, characterless bloke who uses his young estranged son to get in her pants, and making Stockard Channing cry on national TV. I feel positively enlightened. The only appeal to this tackily directed piffle is Ms. Jolies easiness on the eye. Except in this she looks like a heroin addict with Margaret Thatcher's hair do.

As a huge fan of Angelina, I read about this movie and I thought "What the hell? Oh, I bet this is gonna be lame... nice title." but after a while I started wanting to see it more and more until on opening night I HAD to go. And I have to say the movie wasn't awful.. and it wasn't, like, the best movie I've ever seen. But it was fun.. I loved it.. and I'd definitely like to watch it again. The scene where the crowd was singing was kind of stupid and unrealistic.. but it was funny.. and like a lot of things I couldn't stop laughing at it. Haha. This is the kind of movie you watch when you just want to have some fun with a bunch of friends.. and if that's all your looking for then you'll love it too. Angelina was awesome, as usual, and the rest of the cast did pretty good too. If you thought this was a bad movie then you're probably just expecting too much from it. I thought it was great!

Y.A.W.N. The alternate title for this was a good movie or nothing like it.