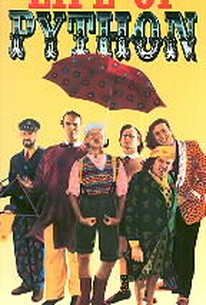 This 56-minute video celebrates 25 years' worth of inspired lunacy from Britain's Monty Python's Flying Circus. Loyal Pythonites John Cleese, Eric Idle, Terry Jones, Graham Chapman, Michael Palin and Terry Gilliam are interviewed, offering surprisingly sobersided insight as to what made their zany aggregation tick. Highlights include vintage clips from the Monty Python TV series, as well as vignettes from the group's theatrical features and concert appearances. As a bonus, we are treated to rare vignettes never before shown on American television. If you've never been exposed to such classic routines as "Dead Parrot", "Lumberjack" and "Department of Silly Walks", don't pass up this opportunity. ~ Hal Erickson, Rovi

Critic Reviews for Life of Python

There are no critic reviews yet for Life of Python. Keep checking Rotten Tomatoes for updates!

There are no featured reviews for Life of Python at this time.