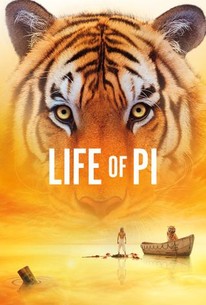 Director Ang Lee creates a groundbreaking movie event about a young man who survives a disaster at sea and is hurtled into an epic journey of adventure and discovery. While cast away, he forms an amazing and unexpected connection with another survivor...a fearsome Bengal tiger. -- (C) Official Site

News & Interviews for Life of Pi

View All Life of Pi News

Critic Reviews for Life of Pi

Veteran filmmakers will warn you, don't film at sea and don't work with animals. Ang Lee built a vast tank in Taiwan and he whips up awesome storms. [However,] watching the water here is more rewarding than watching the characters.

Lee is a wizard, Life of Pi is an incredible spectacle and the technical effects are brilliant.

Despite some lovely images and those eyepopping effects, it is a shallow and self-important shaggy-dog story - or shaggy-tiger story - and I am bemused by the saucer-eyed critical responses it's been getting.

Is Lee's film a fable? Is it an adventure? No, it's a super-movie.

Yes, this is fantasy cinema. One man, alone with his wonderment, suspended between sky and sea.

I have certainly seen dramas about survivors; but none, absolutely none that I have seen compare to the spectacular Life of Pi. [Full review in Spanish]

Among its many virtues, this beautiful fable of a teen boy holding a grown tiger at bay for 277 days at sea makes a strong case for the superiority of live-action drama over animation...

...in the end, we must abandon ourselves to the storytelling. With a gorgeous film like Life of Pi, that's not hard to do.

Although certain narrative themes seem overblown or loaded with fallacious simplicity, film is a visual medium at heart and LIFE OF PI is the work of a visual storyteller at the top of his game.

In a rare alignment of artistic vision and blockbuster ambition, Life of Pi stretches the horizon of cinema's new technology to restore old-fashioned movie magic.

Lee imbues the film with remarkable grace, even when its imagery threatens to overwhelm it.

Audience Reviews for Life of Pi

Beautiful... Just beautiful. Ang Lee brings to life one of my favorite books and does it with such passion and determination. This adaptation, thought to be "unfilmable", achieves wonders in 3D and visual effects, as well as emotional story telling and great time first performance by Suraj Sharma.

Honestly, I read the book long ago before I watch this movie and when I heard that 'Life of Pi' will be made into a movie my question were : how can a boring book turned into a movie that will drawn the audiences' attention? But after I heard a lot of positive reviews on this movie, I was tempted to watch this movie.. And after I spent almost 2 hours watching this movie, I must gave a big two thumbs up to Ang Lee for making a beautiful visualization of this novel.. Suraj Sharma also make a great and quite impressive performance for his Hollywood debut performance as Pi Patel.. Overall, the Oscars that this movie got shows us how great the quality of this movie had..

An incredibly captivating story of the titular character, Pi, that ingeniously thrusts audiences so closely with the main message of the movie. I don't think any movie has questioned and talked to me in such a direct but powerful way like "Life of Pi" did. At the heart of it, "Life of Pi" is a drama/survival flick. With a movie so grounded thematically, people quickly assume that this is an art-house film. I respond with a resounding no. "Life of Pi" is crafted with such cohesion; everything to the plot, actors, script, and cinematography mesh together to bring an entertaining but thoughtful piece of art. Let me tell you, the visuals are absolutely gorgeous. I still think best cinematography should've went to "Skyfall", but that doesn't make "Life of Pi" an ugly one though; the art direction and the colors truly pop off the screen here. "Life of Pi" is, in my opinion, what should've taken the cake for best picture. Yeah, I enjoyed "Django Unchained" and "Skyfall" more, but as a whole, "Life of Pi" covers all the bases of what makes a real solid film.

A great undertaking for director Ang Lee, this adaptation of the 2001 novel from Yann Martel asks about the entire world, but only gives murky answers. It speaks about religion or spirituality, and how a young man copes in the middle of the ocean with a Bengal tiger, shipwrecked for almost a year. He experiences the world of nature around him, finding himself broken and looking for his God, while also finding himself connecting to nature through his travels with Richard Parker, the tiger. Their relationship turns swiftly from one of bitter feud to a strange reliance and emotional dependency. What makes the film verge into adventure are the visuals, the use of animals, and Pi's desire to keep a record of their journeys. These all instill a fun and near family atmosphere to the film, but looking at the deeper meaning and message to the film, there's nothing truly adventurous about it. It's much more about how we believe the world is linear, and in reality it doesn't make any sense and life as we know it is fluid and uneven. The first twenty minutes are the most enjoyable, though they have nothing to do with the shipwreck, or Pi's time at sea. It tells about Pi's life, the person he becomes, his ties with his family, and how he copes with his world as a Hindu Christian. It's essential to the rest of the film, and once we get into the exposition of the sea, we lose some of that character to the CGI tiger and wave machine made ocean. This film is beautiful though, and that's the main reason people love it. It's colorful, lively, and has some scenes of real and computer generated nature that have you in awe. This film is probably best seen in 3D and it's a shame that I couldn't see it in theaters. The ending has a slight twist, though it's doubtful that you will find it distracting from what the film is trying to say. This is definitely a film that you have to pay attention to and experience with all your senses so that you can appreciate the ending better, and realize more about the character than what small amount of personality is shown onscreen.