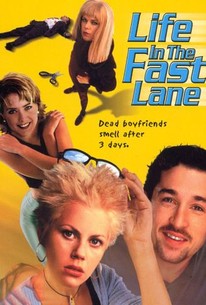 Eleanor Gaver wrote and directed this slapstick comedy-fantasy about graffiti-artist Jeff (Noah Taylor), who loves artist Mona (Fairuza Balk). After Mona produces a painting in which a church sculpture crushes a girl, she sees a church accident identical to her painting, although a stranger (Patrick Dempsey) intervenes. Mona takes a fickle fancy to this man and ends her relationship with Jeff, who enlists the help of Mona's boss (Tea Leoni) to mail himself to Mona in a box. When Mona tries to open the box, she impales Jeff with a pair of scissors, and the film then focuses on efforts to get rid of the body. Shown at the 1998 Hamptons Film Festival.

Patrick Dempsey
as The Stranger

There are no critic reviews yet for Life in the Fast Lane (There's No Fish Food in Heaven). Keep checking Rotten Tomatoes for updates!

There are no featured reviews for Life in the Fast Lane (There's No Fish Food in Heaven) at this time.