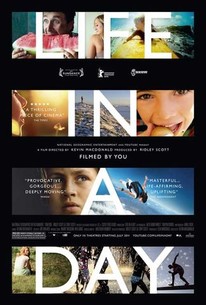 Life in a Day Photos

The 24th July 2010.... 80,000 Lives.... 4,500 Hours of Footage... 2 Award winning Filmmakers..... Now one incredible motion picture event. What began life as a startling cinematic experiment becomes the must see movie experience of the Summer. Created entirely from footage uploaded by YouTube users, Life in a Day is a film first: exhilarating, moving and very, very funny... it is the story of our world. Told by us. -- (C) National Geographic

News & Interviews for Life in a Day

View All Life in a Day News

Critic Reviews for Life in a Day

It's a feel-good movie in that sense, affirmative without being sentimental or exploitative.

Inevitably, the 90-minute film has a lot to live up to. And, by and large, it succeeds in its mandate.

This pointillistic view of everyday people never quite gels as a movie, but it has its point-and-click moments.

What I took away were some individual moments from people whose lives I wish had played out more.

Give Macdonald and crew credit for picking out good, clear, telling contrasts, and not sweating potential heavy-handedness.

It strives awfully hard for depth but, more often than not, comes off too shallow.

All too well summed up by its closing bit, where a young woman bemoans how she hoped for an eventful day but ended up with another rather mundane one.

The many windows into different lives, capturing moments humorous and sad, ordinary and momentous, build into quite a moving film.

It's best to simply ignore its corporate branding and accept the spirit of deeper understanding and celebration of the project's intention.

With director Kevin Macdonald finding a rhythm among the myriad footage submitted, this honest, funny and touching doco is an incredible achievement.

You walk out with a good feeling, having seen a lot of humanity in the almost raw.

Audience Reviews for Life in a Day

The very idea of this film fascinated me, so I had to give it a shot. I must say, that if life itself fascinates you, you may just fall in love with this film, if you want to call it a film. These two directors asked people across the entire world to document their day and send in the footage so that this film could display the joys, struggles, happiness, and sadness surrounding us. This film displays these peoples lives very well, I just wish the film had been a little longer to explore a bit more of their lives, because in their videos they clearly wanted that. Life is intriguing to me and think this movie broadened my mind of how others view the world. "Life in a Day" is a very special film, that may not be groundbreaking, but it is very well put together.

Truly a groundbreaking achievement that shows the kind of art only possible in our "always connected" present. "Life in a Day" is the reason Youtube was invented. Away from gag-inducing pop, rant, and novelty videos is a global community capable of more than flaming each other in the site's comment sections. Over 80,000 video submissions have been cut and edited together in a glorious, sequential kaleidoscope depicting just what life meant to countless individuals in one day (July 24th 2010) from around the globe. The result is stunning, a meditative experiment that deserves comparison to the liked of "Baraka" and Godfrey Reggio's Qatsi trilogy. The viewer is taken on an emotional odyssey, through segments warm, sad, funny, disturbing; to uncomfortably voyeuristic. It's exhausting, it's scatter shot, and it's life. You'll be thinking about this after the credits role.

Life in a Day isn't the most moving piece of cinema ever made, nor is it capable of sustaining an audience's interest through out. But there's a lot of amazingly captured material here that was shaped into an awe-inspiring film that has a simple message. It's great to be alive.

Life in a Day isn't really what you would call a film so much as a long Youtube video without anything tying it together. The film balances between the everyday, ordinary lives of people from all over the world and the fantastical possibilities of one day, all encapsulated by film, and all simultaneously happening at the same time. This film was made possible by a compilation of Youtube videos, and several camera crews which went into the developing world. The parts that were shot by Scott Free Productions didn't always coalesce with the irregular footage of Youtubers. These people showed their everyday actions, including their morning routines, what was in their pockets, and telling what they were most afraid of, all questions the production company asked them to answer in their videos. These questions at times helped to keep the film balanced between the mundane and spectacular, although this film was haphazard much of the time. It wasn't exactly the amazing trip around the world I was expecting or a true look into the lives of every culture and clandestine society on Earth, but visually there were some great scenes, including a skydiving expedition, the explicit death of a cow, and scenes of the everyday lives of Indians, Africans, Australians, and the like, a view of the world I hardly ever get to see. Still, there could have been more. Though the film broaches much of the world, and tries to tie things together with questions, human experiences, and the confessions and condemnations of the scared youth and far more vulnerable adults, it still tried to please too many people with cutesy faire. The film doesn't reach any new heights, or showcases anything extremely vivid or interesting, but does give a chuckle once in a while, a swell of emotion at others, and a decent amount of introspection to anyone who watches with an open heart and mind. Though the execution might not have been perfection the first time around, it was a decently poignant film in places and though not hard hitting it did reveal a new layer of humanity that hasn't been seen directly. For such a broad spectrum of life, they did a decent job overall.

Life in a Day Quotes