The Life Before Her Eyes2007 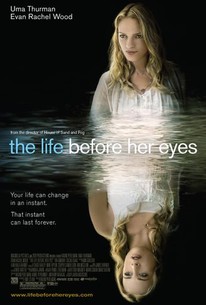 Critics Consensus: Despite earnest performances, Life Before Her Eyes is a confusing, painfully overwrought melodrama.

Critics Consensus: Despite earnest performances, Life Before Her Eyes is a confusing, painfully overwrought melodrama.

Critic Consensus: Despite earnest performances, Life Before Her Eyes is a confusing, painfully overwrought melodrama.

The Life Before Her Eyes Photos

Based on author Laura Kasischke's novel The Life Before Her Eyes, House of Sand and Fog director Vadim Perelman's provocative study of memory, morality, and conscience stars Uma Thurman as the guilt-ridden survivor of a harrowing, Columbine-like high-school shooting. To any outsider, Diana (played as a young girl by actress Evan Rachel Wood) and Maureen (Eva Amurri) were polar opposites; Diana was always questioning authority, while Maureen quietly went about fulfilling the expectations of her devoutly religious family. Yet it was precisely theses differences that drew the two girls to one another and found them gradually growing to become best friends. As with any anxious high-school student, Diana and Maureen both existed in that strange grey zone between childhood and adulthood that found them constantly pondering the endless possibilities that awaited them in the outside world. Flash forward years later, and Diana's (played as an adult by Thurman) life isn't anything like she imagined it would be as a young girl. As Diana's traumatic past gradually comes into focus, it soon becomes obvious that she was profoundly affected by a pivotal event that occurred just prior to her high-school graduation. ~ Jason Buchanan, Rovi

Jewel Donohue
as Mother at Shooting

Jessica Calrson
as Girl at Shooting

Critic Reviews for The Life Before Her Eyes

A hopelessly overblown melodrama, which oversteps its mark with pretensions of narrative complexity and social currency

[Perelman] over-explains everything at the end with a montage of repeated scenes that ensures you never need see this film more than once.

Ambition and accomplishment are aeons apart in this would-be meaningful drama.

Surely the point of a "twist" is that it should slot into the plot with a satisfying click, not that it should invalidate 50 per cent of what came before it?

Vadim Perelman's drama is both tasteful and tedious. With its honeyed visuals, affluent air and coy portents of disaster, it's like an advert for private health care played out on an endless loop.

The film's dogged repetition of its pivotal scene has to go somewhere, but it's enslaved to a narrative conceit even M Night Shyamalan might find a trifle gimmicky.

Falls flat under the weight of its own self importance.

Every retouched color and dramatic visual effect serves to pollute the movie's already sloppy metaphysics with an unpleasant strain of hysteria.

In the hands of the director Vadim Perelman, it becomes a jumble of dramatic scenes and disorientating flashbacks that merge into a confusing, stream-of-consciousness narrative, and the twist, when it comes, is a complete cheat.

An American high school drama with a tiresomely familiar twist.

A thoughtful, if sentimental, semi-successful attempt to craft a drama about life and choice around the difficult subject matter of a school shooting.

The movie's relentless dream-like quality could induce slack-jawed wonder...or chronic narcolepsy depending how receptive the viewer is to non-linear narrative and super-stylised flights of fancy.

Audience Reviews for The Life Before Her Eyes

This film reminded me of 'Stay'. But while I liked 'Stay', I didn't like this one much. The story is told in an unconventional way, and that's what goes against this movie. It was told in a very complex and confusing way, which while maybe smart and brilliant, but wasn't a fair decision in this case. The ambiguity wasn't applied effectively and I guess that the shoddy screenplay is to be blamed for that. On the other hand, I found the main plot of the movie to be quite impressive. Could have been far better... if only they'd executed it in an appropriate manner!!! The thoughtless and careless use of the subject matter makes the movie rated much lower than what it would otherwise have been worth of.

It's funny how insignificant teenage years seem when you're actually living them. Culture and media tell us that they are the defining years, that we will all look back someday and see them as the turning points in our lives. I'm not totally sure I buy into it, but apparently Vadim Perelman does. We see the days and events that defined Miss Diana's life, and, big surprise, they all occur within those glorious teen years. I wonder if at some point in all of our lives we are completely filled, everything is finally how it should be. Then, something happens and we break, and the moment defines everything else, rewrites everything to happen thereafter. The film is emotionally devastating. Very rarely is a story this intense or affecting. There is a major plot change close to the end of the film and I didn't totally understand it. Depending on how it was to be taken, it sort of changes my perception of the film. Then again, that could have been the point. It is a beautiful, dense film and I really think it would take multiple viewings to understand everything that was communicated, grasp all of the meaning.

I had no preconceived ideas about this film going in, other than I had heard that Uma Thurman had given a good turn in a dramatic role, so I was able to sit back and let the film unfold. What appears on the surface to be a story about teen angst and overcoming not only a tragedy, but the mistakes you make in high school, both told in well balanced flash-backs, The Life Before Her Eyes has a plot twist that I found provocative and did not see coming (unlike Shutter Island). I found the script to be intellegent and well crafted and the photography to be sublime. The traumatic tragedy is handled very well, giving you just a hint of gore without wallowing in it. Each flashback to those scenes is just different enough to continue to rachet up the emotional impact. There are themes that continue to fold back into themselves, like the scenes involving rain and water (the photography where you view events from underwater, making what you see somewhat blurry and distorted is wonderful and subliminally telling). I became emotionally invested in the two high shool girls, who are obviously BFF before the term was coined, and found Uma's reflections on those days poignant, as triggered by the 15th year anniversary of the tragic school event. I knew a girl in high school who not only looked a bit like Evan Rachel Wood, but embraced the rebelious, maverick nature she portrayed, so her performance, while a bit uneven, resonated for me, and I found it ironic that her older, more stable self, portrayed by Uma Thurman, was frustrated by her own young rebelious daughter. Unfortunately there are a few scenes that are overwrought and melodramatic, which are all the more out of place when viewed in context with the rest of the film, but for each questionable scene there are moments of brilliance, from the beautifully crafted visuals to the scenes with Uma, as an art teacher, discussing art as a window into the essence of life. I thought that the film had made a misstep when, about 3/4 through, it showed a flashback to the parochial school which had just put crosses on its expansive lawn to protest the abortion clinic in town; again, a beautifully crafted scene of visual impact - but it left me wondering why, with all the emotional baggage, Uma would choose to enroll her own child there. Of course this and the repeated use of Rod Argent's old Zombies song are all revealed in the closing act.

The Life Before Her Eyes opens up with the typical high school day of not really caring about classes and dishing on whoâ€™s doing what with whom. But as Diana (Evan Rachel Wood) and Maureen (Eva Amurri) discuss life and death affairs in front of the bathroom mirror all hell breaks loose as a student, alienated and depressed, begins to pen fire throughout the school. Eventually he makes his way to the bathroom and the life changing event for these two girls. Flash to twenty years later and Diana (Uma Thurman) is married with a child, but the past still haunts her. The events of that day leave a thick cloud over her world and dictates what she does and where her child goes to school. As the anniversary of the event approaches Diana finds that it is allowing for her life to spiral out of control. This is an OK exercise in examining the teenagers we were and how they became the adults we are today. Wood and Amurri keep the audience interested while Uma begins to bore us to the point of annoyance. She either over sells it or under sells it and it coats the film in a funk that it doesnâ€™t really get out of. A competent film that youâ€™ve never heard of it does present an interesting premise, yet director Vadim Perelman tends to go a little to artsy with the film. Itâ€™s a slightly above average film at best that youâ€™ll watch, roll over, go to sleep, and forget about in the morning like a nothing special dream.

The Life Before Her Eyes Quotes