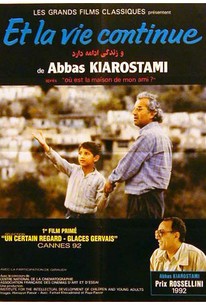 And Life Goes On (Zendegi va digar hich) (Life, and Nothing More) Photos

The thin distinction between fiction and reality comes in for some blurring in this fact-based near-documentary. Learning of a major earthquake, the director of a children's movie, Where Is My Friend's Home?, is worried about two of his performers in that film. He sets out with his son to interview the survivors and learn the fate of his two acquaintances. However, he hires locals to play himself and his son and hires local earthquake survivors to play other earthquake survivors. When his alter-egos discover the actors, they are two people who have been hired to impersonate the two men. Even though every story told by the filmmaker is accurate, as are the settings and scenes of devastation, everything is just one step away from reality. Even unsympathetic reviewers saw some saving grace in this self-conscious posturing, in that it is aware of itself; as one old man says: "They told me to say this was my house, but my real home was destroyed in the quake." In addition to coy games played with reality, the film is a moving testament to the will to survive and get on with life, as it shows refugees crowded into a tent to cheer a soccer game being shown on television. Director Abbas Kiarostami has explored the blurred line between fiction and reality before in his well-received film Close-Up, a true story about a man who was arrested for impersonating a movie director, featuring all the real-life participants in a slightly fictionalized re-telling of the events. ~ Clarke Fountain, Rovi

Critic Reviews for And Life Goes On (Zendegi va digar hich) (Life, and Nothing More)

a self-conscious deconstruction of the cinema itself, uncovering in ways both subtle and overt how movies are fictions that nevertheless help us recognize fundamental truths

There's a kind of playfulness here that belies the seriousness of the task at hand, and yet under Kiarostami's masterful eye the film becomes a sort of wry celebration of the Iranian people's determination to keep going.

Yet another masterpiece and perhaps the first film on which the filmmaker really began playing around with space and reality.

It's a film that denies even the most rudimentary of dramatic arcs: Nothing happens, and yet life erupts all around.

An amazing film that never fails to hold your interest.

If one thing is evident, it's that Kiarostami enjoys blurring the line between real life and fiction.

So natural are Kiarostami's non-professional actors, that the line between fiction and non-fiction is continually blurred.

The responsibility that Kiarostami feels toward truth combined with the genuine compassion that he displays toward his "characters" makes the film profoundly humanistic.

Audience Reviews for And Life Goes On (Zendegi va digar hich) (Life, and Nothing More)

Kiarostami blurs once again the line that separates reality and fiction, this time even making a reference to one of his previous films to offer us a delicate, compelling look at how people can move on with their lives and even help each other in the face of a terrible real tragedy.

absolutely brilliant next-level stuff, but don't watch it until you've seen 'where is the friend's home?' it's a crime that these aren't available on dvd in us

And Life Goes On (Zendegi va digar hich) (Life, and Nothing More) Quotes