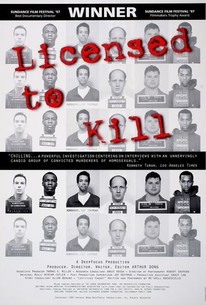 In 1977, documentary filmmaker Arthur Dong was attacked by four youths who shouted anti-gay epithets at him as they beat him severely. This incident led Dong to a long personal investigation of the reasoning and motivations behind gay bashing; this film was the culmination of Dong's study of homophobic violence, in which he interviews seven men convicted of murder in hate crimes against homosexuals as they try to explain why and how they did what they did. The stories range from men who believed that gays were wealthy and weak, and therefore easy targets for robbery and murder, to others who are convinced that God has condemned homosexuals and that they were somehow doing "the Lord's work." Several other men said that their murders of gay men stemmed from shame and confusion over their own latent or active homosexual desires, and one man simply and chillingly states, "I don't have any opinion whatsoever for homosexuals, except they oughta all be taken care of." Licensed to Kill was voted Best Documentary at the 1997 Sundance Film Festival and was shown on PBS as part of their showcase for non-fiction films -- P.O.V.

Offering a harrowing and disturbing look at homophobia and anti-gay violence, Dong's courageous docu, winner of 2 major awards at the 1997 Sundance Fest, is an intelligent exploration of sexual prejudice and hatred in contemporay American society.

A tough and thought-provoking.

Nothing you've heard about the plague of violence against gay men will lessen the shock value of this chilling look at the real face of evil.

The chill and fear it generates are more genuine than the 1989 James Bond film its name evokes.

Licensed to Kill is a real achievement, especially since Dong didn't lose his perspective -- he hates the crime, but not the criminals, and he pins the blame where it belongs.

The sound recording is occasionally dodgy and the film preaches to the converted, but it's a powerful testament to the price of intolerance.

A disturbing documentary about hate crime and the people who commit it.

There's no need for documentarian Arthur Dong to put words in the mouths of the convicted killers interviewed in Licensed to Kill; each man convicts himself with his own words.

It's a simple idea for a film: Do interviews with people in prison who have killed gays and ask them to explain why they did it, but the riveting result is far from simple.

Documentaries need energy, or they can become as dry as reading a dictionary. Dong's questions too often illicit little interest from the prisoners.

There are no featured audience reviews yet. Click the link below to see what others say about Licensed to Kill!