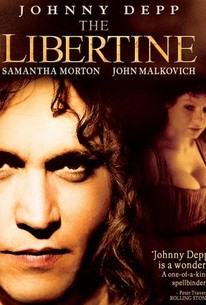 The film follows the second Earl of Rochester's adventures in London, from his passionate romance with a young actress, Elizabeth Barry, to the writing of a scurrilous play which blisteringly and bawdily lampoons the very monarch who commissioned it, Charles II, leading to the Earl's banishment and eventual downfall.

News & Interviews for The Libertine

View All The Libertine News

Critic Reviews for The Libertine

I enjoyed it - or much of it - for reasons that have everything to do with Johnny Depp.

What emerges from the bilious murk of first-time director Laurence Dunmore's film is a sad picture of an intelligent and talented writer who opted for self-indulgence and gratuitous insult over anything more meaningful.

As the character grows sicker and quieter, the drama's energy fades.

The point seems to be that too much of a good thing leads to a vast sense of nothingness and bleak cinematography. Alas, it also results in transforming a film about a sensualist into a remarkably sexless enterprise.

Despite its many flaws, The Libertine is a film worth watching, if only for the restorative talents of [Johnny] Depp and [John] Malkovich.

If Johnny Depp's barmy stumble through the yo-ho-hum Pirates sequel was playtime rehash, then his loathsome portrayal of the pestilent aristocrat Earl of Rochester shows an actor still daring to push the margins of his persona.

Big dull drag of a movie.

Slightly pretentious, but original enough to be a bit interesting, and buoyed by strong performances from Depp and Morton, The Libertine is a decent telling of a historical footnote, most interesting because of its strong feminist message.

Based on Stephen Jeffreys' play, about 17th century iconoclastic poet the 2nd Earl of Rochester (Johnny Depp), "The Libertine" fails to pay off on its promises of taboo sex.

Audience Reviews for The Libertine

I waited a year for this movie from Netflix, what a dissapointment. The worst Johnny Depp movie I have ever seen, Filty from start to finish. Not worth the wait or the effort. 1/2 star

A squallid period piece mired in the mud of historical accuracy and a meandering direction. Wasting a very good performance from J Depp, Samantha Morton and John Malkovich, the film treds unevenly over the cobblestones of its debauchery - too graphic - yet not shocking, as the "love" scenes often become too long, too artsy, and too pointless. The hedonistic aspect of the film is intriguing, and somewhere within there is a message pondering acts for self versus the selfless act. - I believe that the script would have been better if it had adhered more towards these ponderings instead of concerning itself with minor charactors, historical detours and dramatic non-sequitors. Samantha Morton's charactor comes across as beguiling, and yet we remain unsure of her motivations, as so much appears to get glossed over by a simple "he is my lover" - but what does that mean? What is the context and why the later appearance of nonchalance? Was there something implied in the king's request that she be a spy against Depp that would lead her to detach herself from him? So much could have been mined here. The introduction and conclusion are a nice touch, and the speach before the house of lords a wonderful tour de force by Depp (and almost worth viewing the rest of the film for), but even when the film does it right, ie. said scene in the house of lords, it squanders the dramatic credit by almost throwing away the subsequent meeting between Depp and Malkovich, tossing aside the true theme of the film just as easily as Depp's depraved charactor throws away the respect of his king and the adoration of his followers.

Throughout this movie I kept saying to myself. "underneath the vulgarity there is a good movie with good story." I am still not sure if I was right or not! I really just dont know. Johnny Depps opening Monalogue was spectacular. Very Very well done. And of course, its Johnny Depp so you know the entire performance with be amazing and He did not fail. Now I know that his movie was pretty much HATED by the critics but I was very surprised that Johnny was not nominated for an oscar! He was completely immersted in his character wich, I guess he is in all of his movies, and I really beleive that the Academy should honor him more often then they do.

This movie was a bit overhyped for me, but it is equal parts tragedy and badassery. "Do you like me now? Do you like me now? Do you like me...now?" The female performances are all fierce and fiery. Samantha Morton plays a passionate if talentless ingenue, who under Wilmot's tutelage, gives perhaps the best Ophelia I've seen to date (not that I've seen many), even though it's only snippets, and it might be anachronistic as well. Rosamund Pike is icy and sensuous in the carriage scene and icy and tormented in the big confrontation scene. Some excellent zingers and profoundly romantic moments. "May I always be in your heart, sometimes in your thoughts, but never in your debt." Ooo chills!