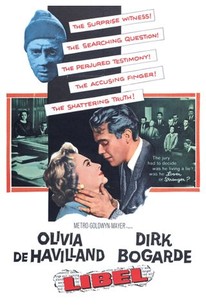 A man is forced to prove who he really is -- and discovers that it isn't as easy as one might think -- in this drama. Sir Mark Loddon (Dirk Bogarde) is a titled member of the British aristocracy who lives a life of wealth, privilege, and notoriety, until one day Jeffrey Buckenham (Paul Massie), a pilot from Canada, makes a startling accusation. Buckenham and Loddon were both inmates in the same POW camp during WWII, and Buckenham is convinced that Loddon is not the man he claims to be; Frank Welney, an actor who was also a prisoner in the same camp, bore a striking resemblance to Loddon, and he is convinced that the actor has taken Loddon's place. The press picks up Buckenham's story, and the question of Loddon's identity becomes the talk of all England; Lady Maggie Loddon (Olivia de Havilland), Mark's wife, is deeply offended and insists that he sue for libel to restore his good name. Mark obtains the services of Sir Wilfred (Robert Morley), one of the nation's best-respected attorneys, but it soon becomes evident that proving Mark's identity in court may not be as simple as it might seem; Mark suffered severe head injuries during the war that cause him to stutter at times and also result in periodic spells of amnesia; the testimony of the many witnesses called by Sir Wilfred and his opponent, Hubert Foxley (Wilfrid Hyde-White), establish no clear consensus of who Loddon really is. Libel was based on the popular stage drama by Edward Wooll.

Richard Dimbleby
as Himself

Anthony Doonan
as Man at Bar

Vanda Hudson
as Girl in Street
View All

The effortless mastery of old-timers Robert Morley and Wilfrid Hyde White, in their roles as crafty lawyers in a courtroom battle, is the most enjoyable ingredient in a British drama starring Dirk Bogarde.

There are no featured reviews for Libel at this time.