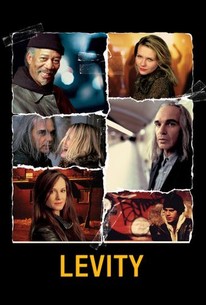 Critics Consensus: Levity could really use some, as it's weighted down by dour self-importance and a heavy-handed message.

Critics Consensus: Levity could really use some, as it's weighted down by dour self-importance and a heavy-handed message.

Critic Consensus: Levity could really use some, as it's weighted down by dour self-importance and a heavy-handed message.

Action comedy screenwriter Ed Solomon switches gears to psychological drama for his feature film directing debut, Levity. Manual Jordan (Billy Bob Thornton) gets released after doing 23 years in prison for accidentally killing a kid during an attempted robbery. Not having any place to go as a free man, he returns to the town where he committed the crime in hopes of seeking salvation. He ends up in a community center where he meets pastor Miles Evans (Morgan Freeman), who helps him out with practical matters like work, food, and housing. Trying to find redemption for his sins, he befriends Adele Easely (Holly Hunter), a single mother who just happens to be the sister of the boy he shot in the robbery. He also meets teenaged Sofia Mellinger (Kirsten Dunst), a rich girl with a drug problem. Still attempting to reconcile with his past, Manual seems drawn to interfere when Adele's son Abner seems headed down a criminal path. Levity premiered at the 2003 Sundance Film Festival.

wish I could find some enthusiasm for this film, which was given a wonderfully austere look by the cinematographer Roger Deakins... For all its seriousness, though, Levity struck me as pretentious and intractably lifeless.

In the end the film is undone by an overload of cliches, and by a gravity that never lets up.

An unrelentingly morose quest for redemption, one that leans too heavily on stock characters and tends to wander in odd directions.

This is a lovely film about redemption and guilt.

The characters in the well-meaning drama resemble symbols rather than people, while the storyline seeks mighty truths that remain evasive.

Little touch of style is enough to compensate for the lack of substance in Levity.

... a bit heavy on talk and light on action, the film grapples with tough issues at the soul-level, instead of selling us feel-good lies or cynicism.

Worth seeing for the visuals and the performances, but as drama it's maddening.

"Levity's complications, however, do not stick in your throat - they slumber in your stomach"

Why do filmmakers continue to let Billy Bob Thornton sleepwalk through their productions?

This meandering movie rises and falls depending on each individual storyline.

Thoughtful and compelling, Levity is an insightful drama that explores some deep issues. The story follows a convict that's seeking redemption and is taken in by a street preach who runs a shelter. Billy Bob Thornton, Morgan Freeman, Holly Hunter, and Kirsten Dunst lead the cast and give strong performances. The film is quite introspective and approaches its material in an unusual manner; which gives it a refreshing tone. Some of the character plots are underdeveloped, but overall the writing's pretty good. Though it's not completely successful, Levity is a smart and well-crafted film that has some rich storytelling.

This was a great story and if it was a book, it would have been amazing. As a movie however it was a bit slow.

Slow and straight-forward movie. I liked it...

BILLY BOB THORNTON, MORGAN FREEMAN, HOLLY HUNTER, KIRSTEN DUNST Manual Jordan has gotten parole from a life sentence for the murder of Abner Easley, and returns to the city he lived in to try to seek redemption. He ends up living and working at a community house run by a preacher, Miles Evans. Manual also becomes friends with Adele Easley, his victims sister, in an attempt to make up for what he did. While working at the home he has interactions with Sofia Mellinger, the druggie daughter of a famous singer, struggling with the lack of adult guidance in her life. It's a slow story, but the character's keep it interesting enough. Not the greatest movie done by any of these actors, yet worth the watch. The movie is simple. No twists and turns. Just a story playing out with some decent acting. Nothing to special. Some people may get bored with it, cause of how slow the movie is. But stick with it. Maybe you will see something in it I didn't. Billy Bob Thornton was good in this movie along with Freeman, and Hunter. I was unimpressed with Kirsten Dunst's role. I just found her annoying. I like her acting though. Just not in this movie. Maybe seeing it a second time around would change my mind, but I don't know if I want to sit through it again.