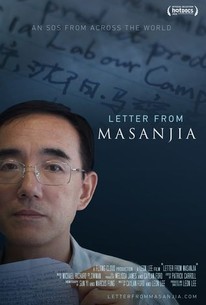 When an American mom discovers an SOS note stashed in a package from Kmart, she never imagines it will lead to the closure of Masanjia, China's most notorious labor camp. When news of the note goes viral, the writer, a Chinese engineer who had been jailed for his spiritual beliefs, fears for his life and his family's safety. Realizing the spotlight is a chance to further expose the brutality of the Chinese regime, he decides to make a film about the harsh reality of being a human rights defender in China, risking his life in the process. For over a year, Sun Yi, the SOS writer, details his entire story on film as he revisits his torturous past at Masanjia and is hotly pursued by authorities. Secret-camera footage and harrowing glimpses of his personal life offer a rare look inside China's terrifying police state through the lens of a political dissident, showing us a true modern hero who will stop at nothing to expose the truth.

Critic Reviews for Letter from Masanjia

"Letter From Masanjia" is a bracing reminder of our sometimes blindered approach to globalization and the effects of simple actions.

It's an important story, made more intense by its tight focus.

...a simple leap of faith by Sun Yi, a Chinese man imprisoned for his Falun Gong beliefs, set a process in motion that ended with the abolition of the labor camp system in China.

Sun Yi's stoicism is admirable and moving, but it's his ex-wife Fu Ning's tearful recollection of their separation that cements the story in your mind.

Multiple layers of irony wipe any sweetness away.

The Chinese Communist Party (CCP) hates the peaceful qigong practice of Falun Gong; it's spiritual, and millions of people practice, so they torture and organ-murder adherents. One guy snuck an SOS letter out of prison. A deeply moving tribute to faith.

A disquieting exposé of China's human-rights abuses... The perseverance on show should leave viewers inspired to learn more.

Audience Reviews for Letter from Masanjia

There are no featured audience reviews yet. Click the link below to see what others say about Letter from Masanjia!