Letter From an Unknown Woman1948 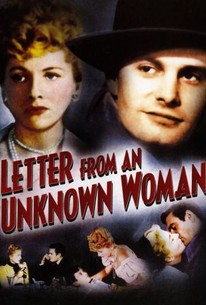 Critics Consensus: Golden Age Hollywood romance doesn't get much better than Letter From an Unknown Woman, a powerful tale of doomed love.

Critics Consensus: Golden Age Hollywood romance doesn't get much better than Letter From an Unknown Woman, a powerful tale of doomed love.

Critic Consensus: Golden Age Hollywood romance doesn't get much better than Letter From an Unknown Woman, a powerful tale of doomed love.

Letter From an Unknown Woman Photos

Perhaps the finest American film from the famed European director Max Ophüls, the film stars Joan Fontaine as a young woman who falls in love with a concert pianist. Set in Vienna in 1900, the story is told in a complex flashback structure as the pianist, Stefan Brand (Louis Jourdan), comes upon a letter written to him by Lisa Berndl (Fontaine), a girl who has been in love with him for years. Stefan is in the process of fleeing Vienna on the eve of fighting a duel. As he prepares himself for the nocturnal journey, the letter arrives. It begins, "By the time you read this letter, I may be dead." As Stefan sits back in his study to read this letter, it turns out to be a confession of unrequited love from Lisa. The story flashes backs to when Lisa was 14 years old and Stefan was her neighbor. After following Stefan with a girlish obsession, the romance gets much more serious, and they have a brief encounter. Stefan promises to come back to her after a concert tour, but he never does. Meanwhile, Lisa marries another man when she discovers that she is pregnant with Stefan's child. When she runs into Stefan years later, he doesn't remember her and tries to seduce her. After Stefan reads the letter, he wants to rush to her side, but now poor Lisa is dying from typhus. ~ Paul Brenner, Rovi

Leo B. Pessin
as Stefan Jr.

Fred Nurney
as Officer on Street

Will Lee
as Mover

Critic Reviews for Letter From an Unknown Woman

Of all the cinema's fables of doomed love, none is more piercing than this.

A breathtaking, bitter, exquisitely orchestrated exploration of love and selfishness by Max Ophuls.

Its layers of interpretation and emotional meaning, combined with its impeccable style, yield an endlessly re-watchable film that changes, as film critic Molly Haskell observes, with time and with you.

...a women's picture that nonetheless turns on male chauvinism.

[Max] Ophuls' first personal project in Hollywood and he injects this exquisitely stylish romantic melodrama with his continental sensibility.

One of Hollywood's, and cinema's, grandest and most emotionally satisfying tales of unrequited love and self-sacrifice.

One of the greatest achievements in American film.

Does the job of the perfect melodrama and moves the audience to tears.

Audience Reviews for Letter From an Unknown Woman

A man receives a letter from a woman he's known, wooed, seduced ... and forgotten. A classic Hollywood melodrama set in romantic old Vienna and handled deftly by director Max Ophuls, who keeps the usual violin chorus down to a discreet tone, allowing for a full feeling of how romance blossoms and then is carried with one. A heady potion for this chick flick about sacrifice, yearning and denial that's as close to fine wine as you'll get. Joan Fontaine and Louis Jordan embody the mood wonderfully.

One of the most heartwrenching melodramas I've seen. I actually had to contain myself from shedding tears, witnessing the passion, intensity and beauty it exudes.

Very sad, literally could not tear myself away from this one.

A young girl's infatuation with a womanizing concert pianist ends in tragedy. What I like best about this elegant weepie is the way that it gently subverts Fontaine's typical screen persona. At first glance, her character is every bit as mousy and vulnerable as usual, but behind this façade lies a remarkably strong-minded young woman; she knows what she wants and - flouting all respectability, and against her own better judgement - she sets out to get it. Although the film chooses not to dwell on the ensuing scandals, on more than one occasion she sacrifices her good name and social standing for the man she loves. I also like the way that Ophüls credits us with intelligence enough to draw certain parallels for ourselves, without spoon-feeding. A good example of this would be the scene where Fontaine says goodbye to her son at the railway station; many lesser directors would have inserted a flashback to her abandonment by Louis Jourdan at this point, or at the very least a snippet of dialogue from that earlier scene.

Letter From an Unknown Woman Quotes