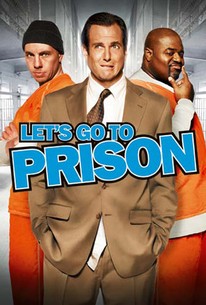 Critics Consensus: Let's Go to Prison is guilty on all counts of cliched setups, base humor, and failure to ellicit laughs.

Critics Consensus: Let's Go to Prison is guilty on all counts of cliched setups, base humor, and failure to ellicit laughs.

Critic Consensus: Let's Go to Prison is guilty on all counts of cliched setups, base humor, and failure to ellicit laughs.

Bob Odenkirk's jail comedy Let's Go to Prison!, stars Will Arnett as Nelson Biederman IV, the son of a judge who ends up being sentenced to serve time in Rossmore State Penitentiary. During one of his rare stints out of incarceration, career criminal John Lyshitski (Dax Shepard) learns of the conviction. John holds a grudge against Nelson's father and decides to get his revenge by going back to jail and making Nelson's stay there as horrible as possible. Chi McBride co-stars as a fellow inmate.

Will Arnett
as Nelson Biederman IV

Jordan Teplitz
as Board Member No. 1

Richard Bull
as Board Member No. 2

Shepard's character periodically rattles off damning statistics about America's booming prison industry, but most of the gags are of the don't-drop-the-soap variety.

Prison makes its 84-minute running time feel like a five-year sentence with no chance for parole.

It's hard to get laughs out of stuff that devolved into parody 10 or 20 years ago.

Arnett underplays to the point where he seems as shellshocked as his character, while Shepard seems to have forgotten that the film is supposed to be a comedy.

Because the movie can't bring itself to take that leap into full-on absurdity, the characters and comic opportunities stay confined to their cells.

As a comedy, Bob Odenkirk's penitentiary send-up is bootless.

The short and the sweet of it: Let's Go to Prison is one of the worst pieces of Hollywood garbage I have ever seen.

...has its share of effective moments - most of which come courtesy of star Will Arnett...

Though sloppily edited like a bad B-movie, this poor man's version of Trading Places will undoubtedly resonate for anyone with a taste for gruesome gallows humor, and a desire to see a spoiled, rich kid get a taste of how the other half lives.

John Lyshitski: If I had a nickel for every time I've been incarcerated... I'd have fifteen cents.  "Welcome to the slammer" Let's Go To Prison is an incredibly stupid, set in prison comedy, with a second rate cast that carry a bad script like this. Will Arnett and Dax Shepard aren't funny enough to carry a bad comedy, and Let's Go To Prison shows that perfectly. There are a few funny moments, and I think I found this funnier than I should have, but there's no deny how truly awful the movie is.  John is a repeat offender who has been sentenced by the same judge three times. When he gets out of prison for a short time, he wants to get back at the judge. Too bad, the judge just died. So instead, he goes after the judges son. When Nelson(the son) is sentenced to go to prison for a misunderstanding, John goes back to prison on purpose, to make Nelson's life a living nightmare. In prison, we see characters ranging from skinheads to big, black guys that want to violate Nelson. It's all rather routine, and the jokes are hit and miss. Mostly miss.  There was a time four or five years ago, when I watched this with a friend while passing a bong. Damn we thought it was the funniest thing ever. I watched it again a few years later, and wondered how I could have found it so funny. Now, watching it again, I could barely make it through the whole thing. It isn't a comedy that works well after multiple viewings. Hell, it isn't a comedy that works well for one viewing. Pretty much just terrible all the way across the board. The jokes are obvious, the characters oddly dull, and the situations seem like they were thought up by some 12 year old. But what should really expect from a comedy that has Will Arnett in a leading role. It can't be good, and it isn't. If there's a reason to watch it, it is to see just how bad comedies can get.

Welcome to the slammer Purely a comedy that isn't very funny but entertains at least with some wild crappy things that only in jail could happen. This is just a movie to watch to joke around with your friends while you watch it, it's not meant to take seriously at all. John Lyshitski is a car stealing slacker, with a weed problem, and has been in Illinois' Rossmore State Penitentiary so many times, he knows it's entire population of both staff and cons by their fast names. Cursed with the old ill luck of being in the wrong place, at the wrong time, in possession of the wrong car, he's been deemed a lost cause repeat offender in the eyes of everyone else. When the heartless judge, who has been behind most of his sentences, goes to the big court house in the sky, John decides to ruin the man's legacy by having the judge's only offspring, Nelson Biederman IV, thrown in the slammer along with him. Here, the world-class selfish jerk learns a certain old lesson the hard way: Do unto others as you would have others do unto you. But has John somewhat gone too far in the payback department?

Let's go to prison is a borderline average comedy. I did enjoy the film somewhat, but the humour is hit and miss. This could have been a terrific comedy, but it manages to only provide a few humorous quips here and there, but never manages to give you laugh out loud moments. But for some reason, I can't quite dislike this film. Despite the fact that the story is paper thin, the acting is not great whatsoever and theres not really anything going for it. But for some strange reason, I like it. I Let's Go To Prison is a comedy that small on laughs, even smaller on story. The characters aren't loveable, but theres something about this film that I like. I guess I like it because it doesn't try hard enough, it's a simple comedy with a simple idea, and it's nothing elaborate. Dax Shepard who usually is pretty funny gives a mediocre performance and so does Will Arnett, whom I think is fairly annoying here. But I guess thats the whole point. (Personally, I never really like him or found him funny). Chi McBride is sort of miscast here too. Let's go to prison had the potential of being a very good comedy, but the end result is a comedy thats borderline decent and is what I ultimately consider a guilty pleasure