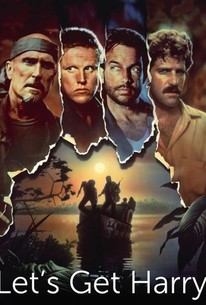 Stuart Rosenberg, under the guise of Alan Smithee, directed this action film concerning a soldier of fortune sent into a South American country to rescue a kidnapped American during a revolutionary upheaval. Harry Burk Jr. (Mark Harmon) and United States Ambassador Douglas (Bruce Gray) are held hostage by Colombian drug dealers who demand the release of associates who are imprisoned in the United States. But the U.S. government refuses to negotiate with the drug dealers. In disgust, Harry's brother Corey (Michael Schoeffling) and three of his friends (Tom Wilson, Glen Frey, and Rick Rossovich), along with an adventurous auto dealer named Jack (Gary Busey), hire mercenary soldier Shrike (Robert Duvall) to sneak into Columbia and rescue Harry. ~ Paul Brenner, Rovi

Critic Reviews for Let's Get Harry

The title tells you all you want to know about this ridiculous film.

Audience Reviews for Let's Get Harry

Director Stuart Rosenberg took his name off this picture, but it's actually not that bad.